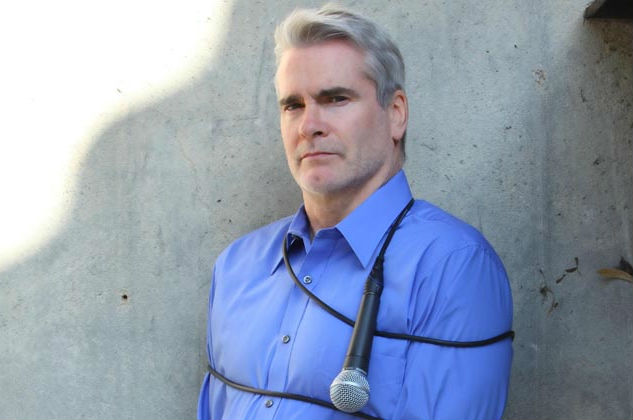 Just do what you want because people will hate you, whatever you do. Be good, adventurous individuals that come together for positive things like the Fringe. These are the two main messages Henry Rollins has for us in a ninety minute wisdom-sharing life lecture, based on his decades in the music business, and latterly, film and TV.

The muscle-bound American has always cut an intimidating figure, but in many ways he’s a pussycat. He’s a charming speaker, kind and generous, and generally positive about humanity, negative about the influence America has had on the world. His insights into people and society might not be especially profound or revolutionary, but they’ve been arrived at through sincerity, and are put across passionately by a man whose success in life has been hard won.

Rollins acknowledges his huge debt to music. In a troubled childhood, his records were his surrogate parents, the people behind them closer to him than anyone. It’s sweet to hear how this brute of a man melted upon meeting Dionne Warwick, whose voice had soothed him in hard times, and “sweet” is not really an adjective you’d use to describe him. Even more uncharacteristically, he confesses to being a Streisand admirer. But it was punk that really got his juices flowing, and the sweat, spittle and bonecrushing physicality of an early Ramones gig is recounted in intimate detail.

He goes gooey-eyed when he recalls a festival encounter with David Bowie. To Rollins’ stunned amazement, Bowie knew who he was, but Rollins still retells the story with the adoration of a fanboy, and speaks eloquently about what Bowie’s death meant to him; more than if his parents died, it turns out. There are lots of big names crop up throughout the evening – Lemmy is another cited as a friend – but it never feels like a celeb love-in.

Rollins is pathologically obsessed with travel. He admits to going stir crazy if he’s at home for too long, and it’s all to easy to imagine him bouncing off walls. But when he’s home, there’s a coffee shop he visits to sit and write in of an evening. It’s in that coffee shop he met two very different fans who loved him in two different screen roles he’s played – a neo-Nazi in Sons of Anarchy and an ice hockey coach in the critically panned film Jack Frost. He’s been hated for both too, of course, which brings him back to his point of just looking forward and doing what you want. It’s a nice little story.

There’s only one moment where Rollins’ chat doesn’t quite ring true. “I love Fringe Fest (sic),” he says. “If I could do this every night for a month to just three people in a hotel room, I would.” You can, Henry. Just book a room and do it.