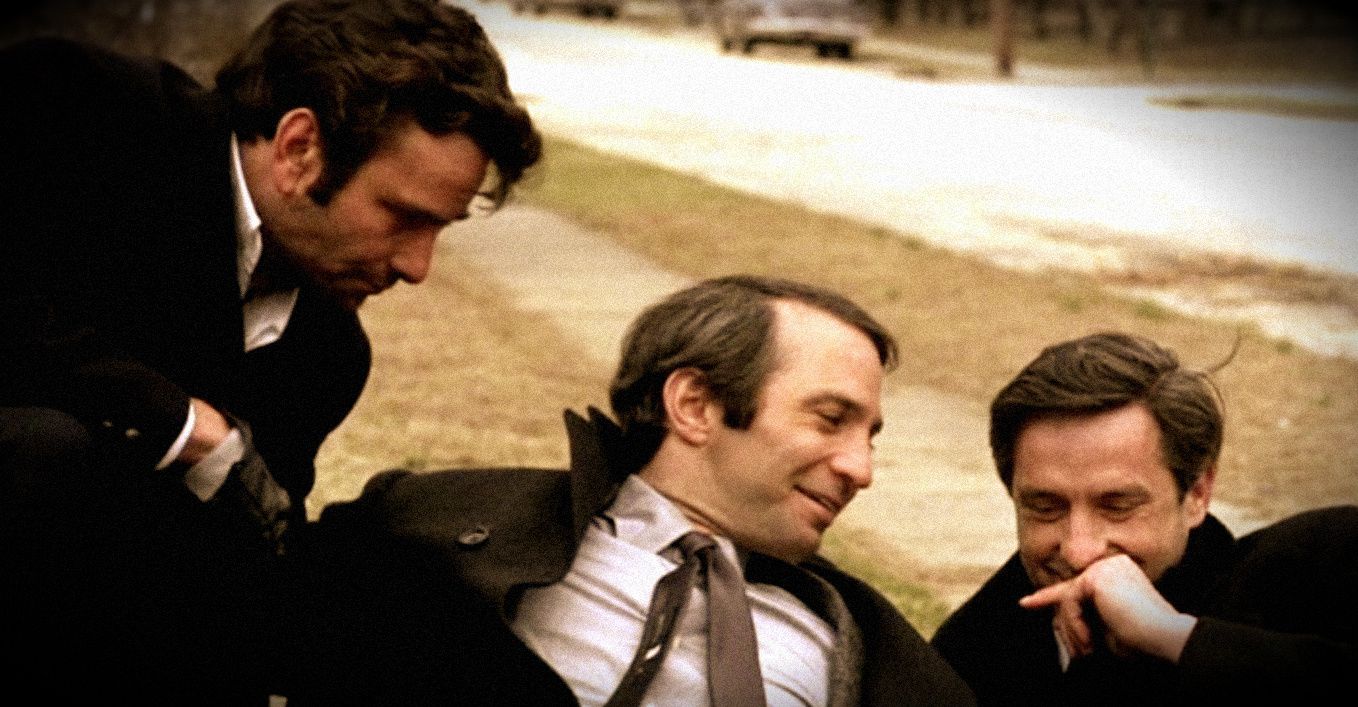 Three long-time friends and family men (Peter Falk, Ben Gazzara and John Cassavetes) suffer unexpected loss and try to adjust by getting drunk and going to London, in that order. Apparently this loose structure was all that John Cassavetes was certain about regarding this project, which followed the ground-breaking independent success that followed Faces the year before. Perhaps more significantly, it is Husbands that is considered his most worthy effort, consistently appearing in ‘greatest’ lists.

Since his death, Cassavetes is frequently referred to in the same breath as other esteemed Euro-auteurs such as Godard, Fellini and Antonioni, but what Husbands illustrates more starkly than perhaps any of his other offerings is an absence of pretension. Despite Pauline Kael memorably railing at the infantile and boisterous antics of the trio, unfulfilled ambition is not an accusation she makes.

His choice of London for the drunken splurge is an interesting one, since Britain never featured highly in his preoccupations, and if any European locale was said to be Cassevetan, it would be Italy or France. Indeed, that may be why he decided to spend months in London (although mostly in hotel rooms and other indoor locations) – precisely because of the alienating quality that the city and its culture would have on brash and uncompromising native New Yorkers.

Unlike his peers, who are said to use the camera like a painter uses their brush, Cassavetes’ interest in actors’ genuine emotions distinguishes him from these frustrated impressionists. Even when a scene may threaten to degenerate into an indulgent emotive mess, his lack of planning and refusal to even use consistent blocking, less it thwart a moment of truth, usually leads to relatable and sometimes base human impulse and emotion. There is a particularly honest post-drink bathroom sequence which involves retching and vomit which would now be played for laughs. When Cassavates said that he makes films for himself, this sequence alone may justify that claim.

Husbands is not the most accessible entry into his work (that would probably be Shadows or Gloria), but it does display the most joy and humour of his films. Despite most of this being found in the misogyny of the era and ultra-macho joshing of Archie, Gus and Harry, the blossoming chemistry shared by the three leads is undeniably evident. The street scenes where the three stars playfight in front of bemused bystanders, like some time-travelling, social experimenting Youtubers, may seem forced, but this interview from The Dick Cavett Show illustrates that the energy was real.

Whether these adventures appeal ultimately comes down to the viewer’s feeling about the three friends. If you enjoy spending time with the carousing and rambunctious trio, and can forgive the inevitable baggage of the era, this film provides an unusual perspective on Britain from an non-mainstream director. Not the best film he made, but definitely not the worst – and if you like Cassavetes and haven’t seen it, then it is a must-watch.