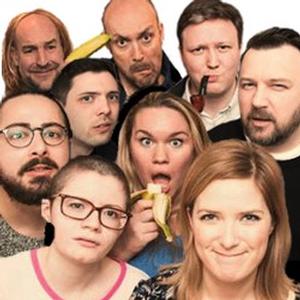 An Imp-revised History of the World

History is full of gaps, and Edinburgh’s own improv troupe Smoky Monkeys promise to fill some of them with An Imp-revised History of the World. The show consists of a series of short improv games, Whose Line is it Anyway style, with a loose historical theme, based on suggestions shouted out from the audience (or, for one game, written lines provided by the audience).

As advertised, accuracy has little hold on their imaginations, nor does any separation between historical figures and fictional characters. On this particular evening, the first game had Darth Vader writing a letter to Chopin to tell him his music is boring, though sadly we did not get to see the suggested music-off. Some of the jokes bordered on tasteless, such as the scene about the last hours of Pompei, in which the volcano was spewing AIDS rather than lava. To be fair, that was due to a line written by an audience member rather than the cast, though it needn’t have been repeated so many times.

The performers have a great energy for the most part. One or two, however, appear much less confident, almost embarrassed about being there. With the acoustics in the upstairs room at T-Bar not being great, it is difficult to hear the quieter ones. The scenes, despite being short, tend to lose the thread completely by the end and, even for improv, make little sense. Nevertheless, An Imp-revised History of the World is funny and enjoyable to watch. As far as free improv shows go, you could do much worse.