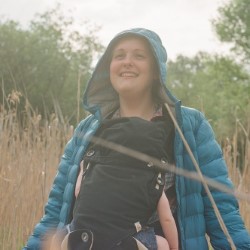 Imagine being so committed to climate change denial that you feel compelled to interrupt and verbally abuse a woman as she shares her vulnerabilities and anxieties since having recently become a first-time mother. This particularly mind-bending example of heckling is exactly what is faced by Josie Long tonight during her show, Tender, in which she interweaves her experience of having a baby with material about current affairs. At the precise moment of the heckle, she’s temporarily put the political content to one side and has just embarked on fairly raw and sincere account of going into labour. While the venue staff deal with the patron in question, Long briefly looks a little shaken, but swiftly regroups like the consummate professional she is and turns the situation to her advantage, rallying the crowd behind her. She deftly dispels the awkwardness and tension in the room,  an achievement testament to her skill and lovability as a performer.

Motherhood has, for Long, simultaneously reduced the number of everyday concerns that she has the time and energy to think about, and amplified those that remain. Climate change has always been a preoccupation of hers, but the idea that we are, in her words,  “hurtling towards the apocalypse” seems all the more personal and urgent now that she has brought precious new life into the world. Similarly, issues like Brexit and the uncertain future of the NHS have become even more pressing and frightening. For anyone questioning her decision to have children amidst these fears about carbon footprints and sustainability, Long has some compelling answers. The fact she’s au fait with the writings of George Monbiot on the issue will not surprise anyone familiar with her previous work.

Tender is a cleverly constructed and thoughtful show. While her accounts of the various trials of new motherhood may not be dazzlingly original, Long’s ability to seamlessly interlace these with fresher and more biting political material is impressive. There is skilful use of callback and an overall cohesion that makes for a satisfying hour.

The really memorable aspect of Tender, however,  is Long’s relentless and infectious positivity in the face of looming global catastrophe. While new motherhood has brought with it various new fears and anxieties, the unifying sense of love and protectiveness that being around young children can provoke in even the most hard-bitten and cynical of adults has given Long new faith in the essential human goodness. In a similar vein, the likes of Greta Thunberg and the school kids protesting climate change have convinced Long that, if anyone can do it, it is our children who are going to be the ones to save us. Pleasingly, she manages to convey this message emphatically without veering towards sounding preachy or saccharine. The gag rate is suitably effective in preventing this from becoming a sermon rather than a comedy show.

While not all of the jokes quite match her signature high calibre, just enough of them do, and the insight and sheer joyousness of Tender means it would be a particularly hard-hearted critic who leaves the Stand without a broad smile on their face. Given Long’s current self-confessed level of sleep deprivation, this is no mean feat.