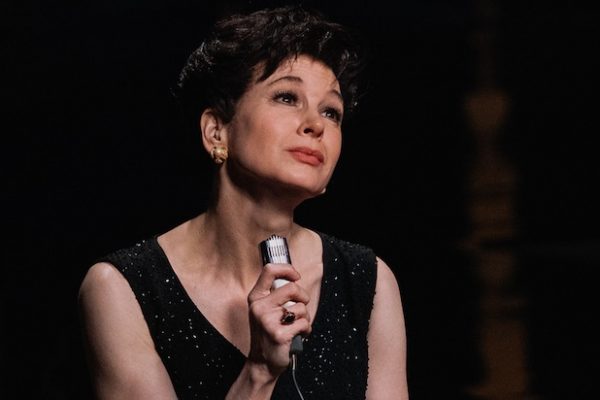 Biopics tend to call out for awards season consideration, and well they might, because a panoply of these films amounts to a good number of the most unendurably dull pictures in the history of cinema. Judy, Rupert Goold’s film concerning Judy Garland’s expedient late-career set of performances in London, is not quite in that bracket of awfulness, but it does not have a great deal to recommend it.

Precarious in matters mental, emotional, familial, and financial, Garland (Renée Zellweger) travels (without her children, who at this point in her brutally upsetting life are her sole motivation) to London and takes up a position on the English stage. She’s recently met the man who will become her fifth husband, Mickey Deans (Finn Wittrock), who makes his own way to London to be with her. Garland’s manager, Rosalyn (Jessie Buckley), is placed in a begrudgingly adversarial position: she clearly admires the person before her, but is frustrated by her lateness, her reticence to go on stage, her use of many substances which act as substitutes for sleep, for food, for pleasure.

Judy is, as a great many British prestige films are, plainly undistinguished: characterised by narrative shorthand, production design which is too cute for its own good, performances which don’t provide enough to latch onto in parts which disappear or fall into background for no apparent reason. Some of the film depicts moments from her teenage years working for MGM boss Louis B. Mayer, whose abusive treatment of her as child-star caused and compounded years of emotional turmoil. These sequences are a pain because they spell themselves out too readily, simplify the sources of her suffering. But well-rounded and consistent craft is not the reason for seeing Judy, and the filmmakers know it: it’s all subordinated to Zellweger attempting to commune with Judy Garland.

And that’s disappointing as well. Zellweger tries to capture the ways in which stardom fixed itself into Garland’s every interaction: Judy is always smiling, always moving her head in a jitter, as though she imagines there’s a camera over the shoulder of every person who greets her and she needs to keep up the airs and graces of the movie star. Likewise, every time she responds to a question, she drops an aperçus and smiles with self-satisfaction, its deployment guarding her from some painful truth. Zellweger’s movements and facial gestures are very studied, but so much so they begin to cancel out any emotions the scenes seek to convey: as impersonation, it’s not bad, but it’s running close to caricature. (However, the performance is impressive with regard to its use of external objects: the detail of Garland in her nightdress furiously spinning a lighter in her hand says “I can’t sleep” clearly enough without the words; even better, the way she holds the microphone while singing, grasping it like a grail).

Judy also provides a point of return for a persistent stereotype of movies from the 1990s: the gay best friend, but adapted here, so now there two gay best friends, Dan (played by Andy Nyman) and Stan (played by Daniel Cerqueira). This is a way of referencing Judy Garland as a queer icon, which she assuredly is, but there must be better or at least less patronising ways of referring to the fact? And yet, what Dan and Stan do is hark back to an earlier era in fandom, one based on generosity and care — so far removed from the fandom on display in our own time, which seems wholly predicated on immediate and total possession.

The film knows that Garland needed that generosity and tries to give it her in an ending which recalls the expostulation of a benign fan during a quiet moment in Garland’s 1961 Carnegie Hall Concert recording: “I love you!” the fan shouts — “Me too!” is Garland’s reply, both joyous in the instant and disconsolate in the context. The final minutes of Judy are desperate, rather shameless emotional kitsch. But they do answer a question not many have asked: yes, it’s possible to scoff and cry at the same time.

At Edinburgh Filmhouse until Thu Oct 31 2019