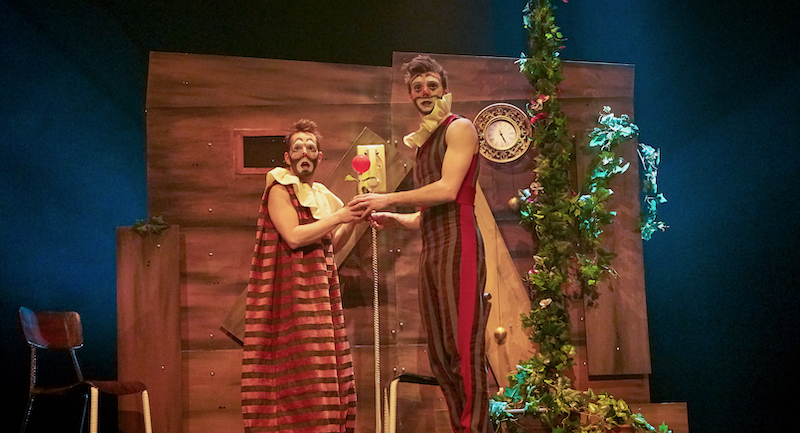 For a moment, forget everything you think you know about clowns. It’s difficult, with those enduring grins, the horror stories and pratfalls. Despite the misconception, the artform of physical clown comedy lies deeper than custard pies and tiny cars. Aerial feats, magical misdirection, gymnastics and, of course, a heaping measure of meticulous timing adds to these absurdist artists craft.

Concealing their sorrow, Les Foutoukours’ Kombini invites us into the artistry of Russian clowning, where painted grins communicate tremendous depth. This isn’t though a thin-veil of ironic buffoonery, belaying a macabre nature – no, politicians stole that act. Our clowns incorporate a substantial nature, carrying the weight of the world on their shoulders: debts, jobs, the monotony of life as well as each other.

Clowns Rémi Jacques and Jean-Félix Bélange share nothing with their Stephen King counterpart. Openly admitting a desire to remove the pervading fear of clowns into one of joy, the physicality of the pair is impressive. Although repetitious, the lifts and gymnastic routines of Kombini are still gasp-worthy, strength evident. With eyebrow raising poignancy, the pair illustrate the monotony of sitting by a phone, suddenly transporting us into realms of pure magic.

If this all sounds a touch too serious, don’t worry – the lunacy is just lurking around a corner. Kombini is messy, oh so gloriously messy, aiming itself at the teen/adult crowd and it shoves you back into childhood giggles.

A heart as big as its laughs, Kombini is a beautiful piece of clowning, offering a reflection on our obsessive everyday lives; love, work, popcorn and careers. When really, everyone is at their happiest when their laughing, playing with balloons or catching bubbles. Aesthetically marvellous, Kombini is sincere in touching our hearts while tickling those funny bones.