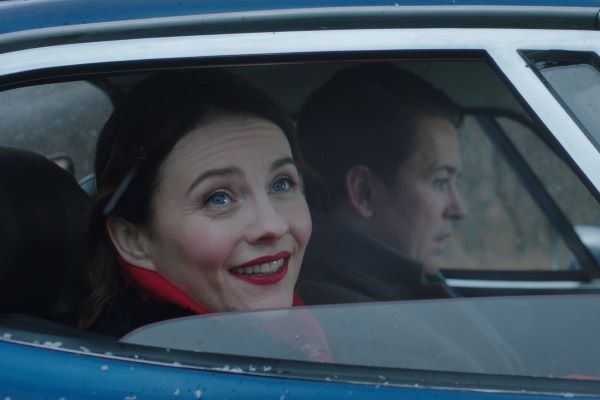 This is the original, and superior, short film on which this is based.  Watching this we see an odd couple dynamic perfectly outlined by the two leads performances and weak gags supported by the sheer energy and enthusiasm of Clare Sheerin.  Mercifully, there are little of the now mandatory, eerie drone shots that populate every establishing scene in cinema, including this new feature.  Perhaps it was Sheerin’s obvious lack of experience that led to director Ryan Hendrick to cast Natalie Clark, but that decision torpedoes his intentions to convincingly portray two strangers getting to know each other as Clark struggles with the script’s comic beats and the chatty delivery that Sheerin nailed.

Jen (Clark) and Rob (Kenny Boyle) cross paths in a remote Highland town after each has found themselves bereft in the romantic stakes. Jen has discovered her boyfriend has a wife and child, and Rob has had a marriage proposal turned down. The odd couple try and make their way back to Glasgow in a blizzard, having missed the last train. They eventually come across a bar full of familiar faces who have gathered as some kind of group rejection of festive cheer.

The original Jen’s performance perfectly encapsulates the sort of persona that is brash and loud but predictably vulnerable and sensitive at her bubbly core.  Recasting Jen produces an uneven result as Clark struggles to find the right tone for the character’s bombast, and her chemistry with Boyle is unconvincing.  Clark and Boyle actually seem quite similar, conveying a veneer of calm and control but beneath that a swirling tumult of pent-up frustration and need to vent.  Unfortunately, for this odd couple pairing to work there needs to be some contrasting elements which Clark fails to deliver and Boyle just seems tired or perhaps unsettled by his co-star’s unsteadiness.

There is moment in which she confronts Clare Grogan (a grieving guest at Sanjeev Kholi’s hotel) for ruining Christmas, and Clark seems to be trying to channel some crazy girl she met once. The painful inauthenticity just comes off as deranged, without any of the requisite warmth or joy that is necessary for the rant to work.  She also dishes out some advice to a young girl in the bathroom of the hotel, and again seems too intense and controlling to be believable as the character she is supposed to be portraying.  This is the fault of Hendrick as it was he who has directed this performance, having chosen or having been convinced, to ditch his perfectly functional lead.

The script also contains strange inauthentic beats; the theft of Jen’s lover’s car being referred to repeatedly as grand theft auto by the hysterical Rob using a phrase that is totally ill-suited to the Highland locale and Britain as whole.  Jen repeatedly asserts that ‘all men are bastards’, as though she is the first woman to identify the opposite’s sex’s nefarious intentions, and Rob suggests the supposedly humorous ‘illegitimate?’ as a more appropriate alternative.  The clumsy and poorly conceived attempts to extend the original idea beyond its obvious confines makes the film come across as a cynical attempt to capitalise on the need for streaming content for a captive lockdown audience, even though it was obviously filmed prior to any such concerns.