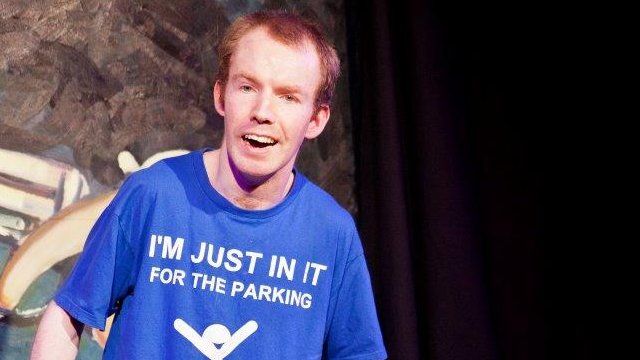 Good earthy humour from the guy with the speech synthesiser

Lee Ridley’s stage name, Lost Voice Guy, is a matter-of-fact introduction to his act. Ridley has cerebral palsy (“suffers from” would not be the words to use), so he can’t speak. He therefore does his talking through a speech synthesiser on his iPad, Stephen Hawking style (which might seem a trite comparison but it’s one he finds witty ways to use himself). Ridley is comically aggressive in his approach, throwing the disability dynamic on its head – we are the dunces who need talking at like there’s something wrong with us. The audience leave laughing and well and truly telt. Mainly just laughing.

The matter-of-fact name he’s given himself is mirrored in his comedy. He shares the same earthy Geordie humour of his fellow Tynesiders from Viz comic. He’s very at home with the twisted and inappropriate. He’ll happily refer to himself as a “spastic” and there’s no pussyfooting about discussing his sex life. Some of the pranks he tells us he played at school sound beautifully puerile. The opportunity for sick belly laughs at this gig is huge.

He introduces the stupid questions he gets asked by able bodied people using samples from songs, like How Long Has This Been Going On? That juxtaposition of over-emoting soft rock questions with blunt, robotic answers is creasingly hilarious.

The speech synthesiser can be a double-edged sword though. Sometimes the monotone enhances the comedy, sometimes it can’t help but spoil a gag through timing. There are also a couple of Heather Mills references that are beginning to date, and a few standard put-downs he’s used regularly. But Ridley’s cheeky persona always carries the day, and despite physical limitations, he delivers a gag with a glint in his eye, a nod of the head and a gesture of the hand. There’s no lack of connection with the audience, even if he can’t adapt his script.

If you said that Ridley was very good “considering”, he would call you a twat. And quite rightly too. Lost Voice Guy is a very funny bloke doing very funny material. There’s few gag deliverers doing better.