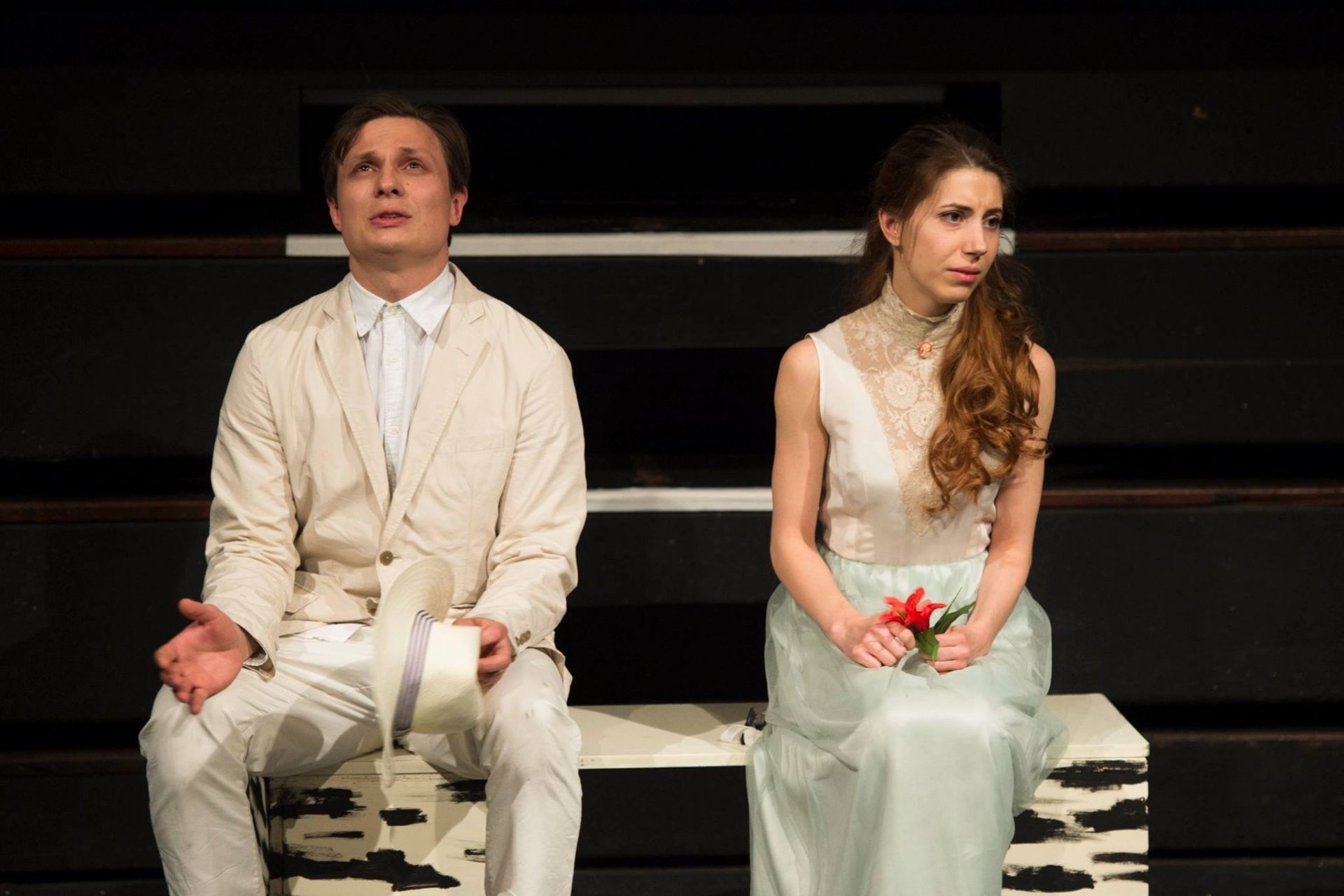 Love in a Nutshell

Since the company’s conception in 2015, Xameleon Theatre has brought together Russian-speaking artists to perform before London’s audience in their native tongue. Following a stage adaptation of Anna Karenina, they have returned to The Cockpit with another celebrated Russian writer: Anton Chekhov. However, rather than perform one of Chekhov’s well-recognised plays, writer and director Dmitry Turchaninov has scoured the writer’s corpus to create Love in a Nutshell: an evening of stories about love and relationships.

Brimming with humour, the nine vignettes depict the challenges relationships can face. Turchaninov has done an admirable job in offering a diverse range of stories and characters, who are linked by the unusual and compromising circumstances they find themselves in.  Whether they are portraying budding romances or crumbling marriages put to the test, the cast move between the various characters and scenarios they portray with ease, with Oleg Sidorchik and Vadim Bogdanov in particular taking advantage of the chance to give their roles distinctive personalities. Bogdanov is a brilliant slapstick performer, and he perfectly takes on the role of a young man often causing trouble for himself. His performance opposite Vlada Lemeshevska in ‘A Lost Case’ is a comical imagining of a young Chekhov as he unwittingly talks himself out of a profitable engagement.

The company’s creative ingenuity shines through the use of stage props. In the first act, a single piece of blue silk material lying on the ground transforms into rippling water and thrashing waves. In the second act, large white bean bags become the snowy hills Chekhov and his childhood sweetheart would sledge down, and the snowman they once built together. The charming simplicity of the set design proves that lavish sets are not required to enchant the audience and their imagination.

Like the relationships depicted, though, Love in a Nutshell has some rocky moments. There are occasions where the play’s action is hindered by the language barrier. When portraying more reserved characters, some of the actors give little away in their gestures or tone of voice, meaning the English-speaking members of the audience have to solely rely on the surtitles to know what is going on. Thankfully, most of Chekhov’s humour overcomes this setback, keeping everyone present entertained.

What Love in a Nutshell really struggles with, though, is with the practicalities of an episodic structure. While it is great to see Chekhov’s one-act play ‘The Proposal’ included, having the farce at the end stalls the pace of the whole performance. The vignettes also lack a smooth transition between them, often ending abruptly. It feels as though more could have been done to tie the stories together, especially given Turchaninov’s decision to have a narrative figure present in most of the scenes (albeit sitting on the outskirts). Having Sidorchik pass on the role of narrator to Bogdanov after the opening scene also feels confusing, especially given that Bogdanov assumes the role for the rest of the performance. Had the cast shared the role of the narrator (or Chekhov as the programme states, though this is not clear), the performance would perhaps have felt more cohesive and free-flowing.

Though there are elements that can be improved, Love in a Nutshell is a charming and mirthful production that showcases some of Chekhov’s lesser-known prose. Through the vignettes performed, Xameleon Theatre remind us of Chekhov’s wit and skill as a storyteller, and how love can be lost and found in the most unexpected ways.