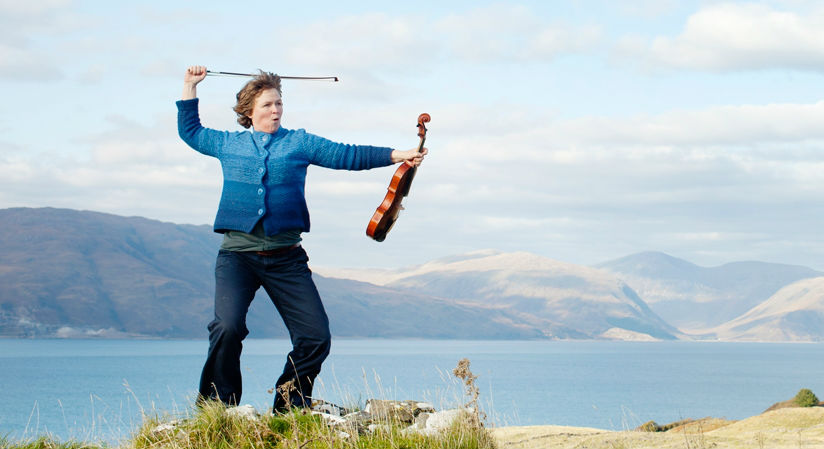 Mairi Campbell is a national treasure of Scotland. Originally trained as a classical musician, she moved into traditional music with her husband David Francis and they became famous through performing the original version of Auld Lang Syne at the White House and in the film of Sex And The City. She told her story eloquently in her show Pulse where she sang, played the viola, danced and acted. More recently, she displayed these skills fluently in her show Auld Lang Syne, which was a big hit at the last Edinburgh Festival Fringe and is still touring Scotland .

In tonight’s show at a well filled Queen’s Hall set out with cabaret tables, she raises her performance to a new level with the backing of five musicians, three singers, three dancers and the Glasgow Ladies’ Fitness Club. The show itself is just over an hour long and features Campbell singing songs old and new, playing her viola and dancing both with the professional dancers and just by herself, storytelling and commanding the stage. At one point she says to us, “I’m really enjoying this evening!” The audience clearly are too.

It is her charisma that commands the Queen’s Hall tonight. Indeed, the contrast with the opening act reinforces this point. Hannah Read is a young Scottish singer-songwriter with a growing reputation, who is now based in New York. She has a very nice voice and sings both traditional songs and some of her own. However, she doesn’t have much of a stage presence and her songs tend to sound the same.

Campbell, by contrast, commands the stage and communicates with the audience, leaving us wanting more even after two encores… and yes, that includes Auld Lang Syne. The three backing singers, led by her daughter Ada Francis with Megan Savage and Frankie Hay, back her ably, as do the musicians, The Pendulum Band, featuring Su-a Lee on cello, Nicky Haire on violin, Innes Watson on guitar, Duncan Lyall on bass and William Jaquet on drums.

Dance is now an important part of Mairi Campbell’s repertoire. She moves naturally to the music herself and tonight she is backed by professional dancers – Nic Gareiss, Jade Adamson and daughter Ellen Francis. They are aided by a group of women from the Glasgow Ladies’ Fitness Club who parade across the stage in a theatrical way. The combination is a delight and the audience respond warmly, aware that it is a special evening. Let’s hope, that Mairi Campbell can mount these events regularly.