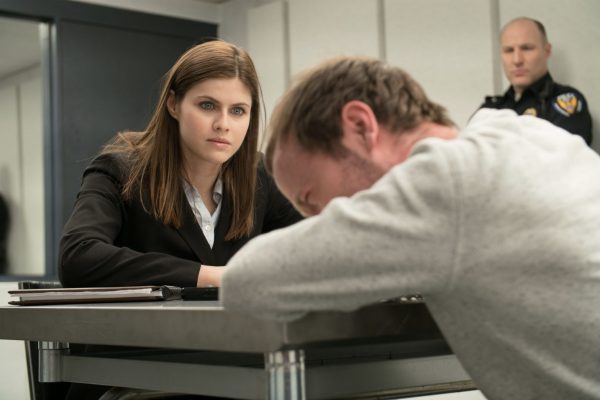 See if this sounds familiar; disillusioned with the state of the world, a weathered police officer finds an unlikely ally in a vigilante killer – joined in their mutual goal of stopping a murderer, suffering from psychological issues, pursuing young women. Had any of those guesses been correct, we would have been watching a better film.

With a gusto-line up, Night Hunter’s cast plays their roles to a passable level, but few seem to realise they’re in the same narrative. Henry Cavill’s Lieutenant Marshall is, even for a film focusing on sexual abuse, relentlessly brooding, over-the-top serious, while Ben Kingsley’s Cooper is a caricature of Alan Moore’s comic book anti-heroes. An unlikely pairing, the two spend little time together – instead, our attention deviates from Cavill’s story alongside Rachel, a police officer who tries to get into the killer’s head, and Kingsley’s castration of unpunished abusers.

Almost buddy-cop level moments of writing litter Kingsley and Eliana Jones as the two entrap victims. Humour is a peculiar crutch the film employs, poorly at that, relying on it to shunt in a chuckle or two – immediately following intense suggestions of mutilation or assault. Rather than laughter, it raises eyebrows in just what the overall direction is. David Raymond wants to take Night Hunter seriously, a knuckle wrapping, gritty thriller – but attaches these scenes as an afterthought.

Writing may be the weakest aspect of the film, but performance follows close. That isn’t to say there aren’t decent moments – Alexandra Daddario and Brendan Fletcher being the only members of the cast actively attempting to improve this piece. Both bring a fire which, as desperate as they are to ignite, is awash with phoned in deliveries from Cavill, Kingsley and Stanley Tucci. Three usually reliable performers in their field but are receiving next to no real direction or character motivation.

Split, Se7en, Fargo and Silence of the Lambs: Night Hunter finds itself an unimpressive chimaera of superior narratives, attempting to cherry-pick concepts and glue them onto its shell. Advancing on a concept is commonplace, it’s a way cinema evolves; perfecting an already established idea. But in drawing vast references, Night Hunter merely succeeds in reminding us how inadequate it is in comparison.

Then it happens – a single concept in an otherwise string of predictability, which snaps attention for five minutes. In these five minutes, we get a glimpse of what this could have been. It took a chance, a dark chance, and while copping out in the end, this scene almost makes the film worth it – emphasis on almost. Here, Raymond captures a movie we want, Mpho Kohao’s performance a shockingly emotive one – no doubt given a boost by being the first insight to the real drama we’ve been craving. It’s a turning point, where Fletcher ramps up the antagonistic factor – let down by an expected shoehorn twist.

More wasteful is Michael Barrett’s cinematography, casting an interesting pastiche of the aforementioned films from which Night Hunter borrows. The colour palette choices are notable, changing upon location, rather than aiming for an overarching style, though misjudged editing makes for dodgy, head tilting cuts.

Hideously misaligning its intentions, Night Hunter forces pieces together from a series of jigsaws into one cobbled, unimpressive mess which hangs onto our attention with a few choice scenes and performances which attempt to reclaim a possibly insightful production, which falters and simply makes you wish you’d rather have stuck on Manhunter.