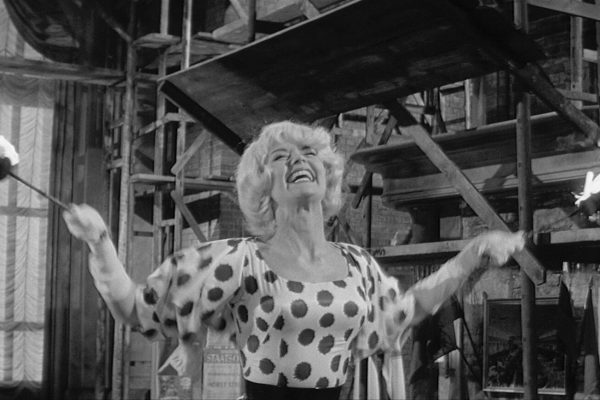 Billy Wilder was born in Galicia in what is now Poland and served his film-making apprenticeship in Berlin. He was one of the many emigres from Europe to land in Hollywood. His outsider status may help explain his delicious take on the absurdities of American life which so illuminated his best comedies like Some Like It Hot and The Apartment (movie magic). He also made some notable clunkers.

In 1948 he returned to a war-ravaged Berlin in the dark comedy A Foreign Affair and went back again some thirteen years later to film One, Two, Three. But this is a movie that, perhaps, only Wilder completists could truly appreciate.

Berlin has been newly divided and CR MacNamara (Jimmy Cagney) is the local head of Coca-Cola keen to exploit the enormous potential of the Russian market and eyeing a Head of Europe promotion. The Atlanta HQ boss’s daughter – the seventeen-year-old hot-blooded Southern belle Scarlett (Pamela Tiffin) – is arriving in Berlin on her European tour. Mack and his wife (Arlene Francis) are to look after her. All goes pear-shaped as Scarlett falls for card-carrying commie Otto (Horst Bucholtz). She tells Mack that Otto has called her a bourgeois parasite and the rotten fruit of a corrupt civilisation, so of course they’re in love!

There’s all manner of slapstick business with cuckoo clocks and balloons and car chases through Checkpoint Charlie and a lot of Cold War-era pop culture in-jokes that are virtually lost in translation. Cagney, however, is in top form – this was his last major film role. He is fully in charge of his fast and furious dialogue but throughout the humour is bizarrely cartoonish. It’s as if Tex Avery was script consultant.

Mack’s assistant is forever clicking his heels and his wife refers to Cagney’s character as, “Mein Fuhrer.” A decade after VE Day this must have seemed daring and funny.  At one point Otto is subjected to a waterboard-style interrogation with water replaced by the incessant repetition of the pop ditty, ‘Itsy Bitsy Teeny Weeny Yellow Polka-dot Bikini.’  The humour is broad.

There’s an excellent supporting cast, especially Arlene Francis, but often the action is like a stage farce with doors opening and closing, sidelong glances, and everyone a grotesque stereotype. Forgive it its weaknesses and it’s funny, rambunctious… and quite exhausting.