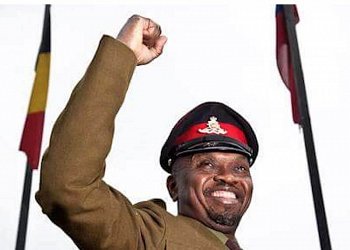 The Rise of a Comedy Dictator

All hail the benign dictator of the Free Fringe!

Those who’ve encountered President Obonjo know about it. The booming-voiced dictator can be found on the streets of Edinburgh press-ganging recruits into his Lafta Republic army and summoning them to his mustering hall upstairs at the Waverley Bar. His spin machine says he’s the son of Idi Amin but this is #fakenews.

Inside an Obonjo induction session/political rally, you’ll be asked to sing the Lafta Republic anthem, you’ll be interrogated on how you can help him rise to power, and if you’re a young woman on the front row, possibly invited to be his 14th wife. Then you’ll be bribed with Lafta dollars to keep quiet. All this has the makings of becoming an annual comedy cult at the Fringe. Devoted Obonjoists always come back for more.

It’s ramshackle. Obonjo keeps fluffing lines, hasn’t really settled on a back story and is continually corpsing. The President isn’t going to get the TV exposure he wants for his regime until he can string it together for longer chunks. But it’s a whole heap of good fun and the fact that behind the uniform is just some bloke from St Albans who’s not taking it all too seriously makes it even better.

Obonjo’s is a very benign dictatorship where the only torture is the splitting of sides. World domination might be out of reach just now, but in the meantime, he can be de facto leader of the Free Fringe, crushing his opponents with comedy. Glory to the Lafta Republic!