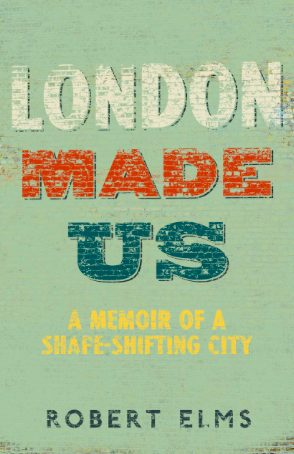 Robert Elms
London Made Us

Infuriating hagiography of one man's love of London.

The ‘London bubble’: that impregnable, self-centred world that shapes the tastes, fashions and politics of the UK. No other city on earth quite dominates the country around it as London does. Politics, book publishing, television, newspapers, theatre and art. Even the most casual out-of-town day-tripper quickly realises that it’s a place where things can happen, especially if you have talent, luck, self-belief and that magical combination of all three. London is special.

Greater London has a population almost twice that of Scotland. It has many faces and hundreds of books have tried to crystallise this magical city.

Author of London Made Us, Robert Elms, was once a music journalist for NME and The Face. He helped promote New Romantic pop band Spandau Ballet and is currently a DJ on local radio – BBC Radio London – and in his unstoppable, blokey writing style there is something distinctly ‘Alan Partridge’.

His writing is of the breathless, deathless sort favoured by music mags and pebble-dashed with the tiresome alliteration – alas and alack – pop journos love. For readers unfamiliar with Greater London, Elms’s blizzard of references to significant postcodes and micro-communities gets a little exhausting after a while. Maybe the constant name-dropping is just what we have to expect from someone who makes his living babbling into a microphone to a faceless radio audience every day.

What’s really so different between Chingford and Chiswick anyway? But anything beyond the M25 (the motorway that engirdles London and helps keep the rest of the nation at bay) is alien territory to Elms. However, he knows his stuff and the book is readable enough. Elms takes readers on a tour to all manner of scabrous haunts to which they might normally fear to tread – seedy cinemas, grubby squats and an endless litany of pubs. Occasionally we meet interesting people along the way. Take Leah Feldman who fought for the anarchist group Black Flag and smuggled arms to the Republicans during the Spanish Civil War. She is dispatched in a paragraph then we’re back to yet more peregrinations through the byways of Holborn.

Then there’s former girlfriend Sade who gets considerably short shrift, yet readers are given endless details about mum serving up Angel Delight and Cresta (a particularly nauseating soda pop) to nipper Robert. More crucially, this hagiography is badly let down by the author’s reluctance to closely examine the colonising of London by big business, Russian oligarchs and tax-dodging. The scandal of luxury flats bought as an investment but never lived in while young people are priced out of the housing market and others sleep on the streets is barely touched upon. There is not much on the gang-related blade culture that blights London nor the health-injuring pollution either.

Elms professes a great love of Soho – especially of its mythic heyday of streetwalkers and stripjoints and coffee bars and Francis Bacon. In the last ten years Soho’s legendary seediness has been totally eclipsed by hip bistros and boutiques, tatty souvenir shops and armies of tourists, its rough edges completely smoothed off. This, Elms suggests, is inevitable and the London he loves will survive. It will always be to him, the greatest city on earth.