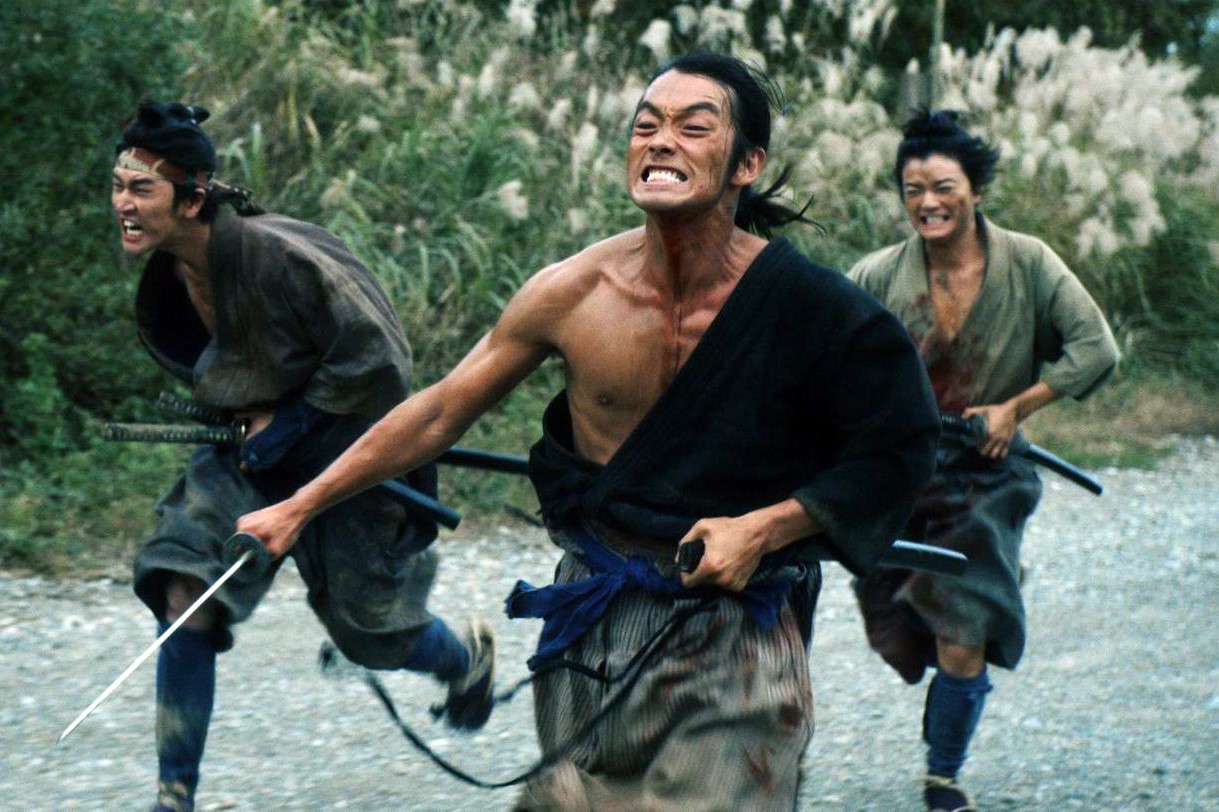 In the 1850’s, Commodore Perry and his ‘Black Ships’ landed in Tokyo Harbour, signalling the end of the Edo Period and the opening of this mysterious, hermetic country to the world. Bernard Rose opens his latest film with a meeting on a beach – Seventh Seal-style – between Perry (a nice cameo from Rose regular Danny Huston) and the Shogun. The Japanese leader is nonplussed by the American, but intrigued by the whiskey, Daguerreotypes, and the pistols he’s brought with him. This event is the tangential catalyst for an unlikely tale of honour, deceit and redemption that takes a while to find its stride, but finds rather aptly a brisk pace that carries it into the upper tiers of recent samurai epics.

One of the feudal lords not keen on 250 years of tradition and stability being swept away in the domino effect of the American visit realises that his warriors aren’t exactly match fit should arms need to be taken up. He decrees that every man below the age of 50 take part in a grueling 36-mile run to help mould his sedentary samurai back into shape. This is mistakenly communicated to the Shogun as a rebellion, and he sends his own soldiers, now packing some of the US Army’s finest ballistics, to quell the imaginary uprising. The race soon becomes a literal running battle.

The central marathon is a metaphor for a nation in flux, and a microcosm of Japanese society at the time. Rather than a cavalcade of carnage, Rose posits the film squarely as a character piece, depicting a variety of protagonists adapting to the actual end of an era. These include such figures an old samurai and a young boy (Naoto Takenaka and Ruka Wakabayashi), one mummified by his Bushido code and the other idealistic but destined to miss out on that particular calling, a princess (Nana Komatsu) who dresses as a boy to compete, and a spy for the Shogun (Takeru Satoh) who fulfills a redemptive arc, among others. The opening act is admittedly slapdash as Rose sets up the many and varied pieces on the board, but it soon becomes necessary when events escalate in the second act and the action jumps briskly between the many strands, before converging again come the end in hugely entertaining fashion.

Tonally, Rose strikes an intriguing balance between elegy for the oft-romanticised warrior society of Edo Japan and a critique of this centuries-long isolation. Ironically, it isn’t too much of a stretch to see the modern parallels in the Western cultures that instrumental in hauling the Japanese out of their self-imposed global exile. This friction between the competing ideologies is as interesting as its story is offbeat and provides an extra dimension to ponder beyond its satisfying conclusion.

Samurai Marathon is by no means the work of a tourist. Rose’s deep respect for Japan and the traditions of its cinema are evident. It feels like a modern take on the classic template of the likes of Kurosawa and Kobayashi. It’s not as frenetic or chaotic as the likes of current genre master Miike Takashi; instead it remains relatively restrained with even the blood-letting infused with a surreal beauty, such as a spurt of gore sprayed artfully across tall, autumnal grass. Add a luminous score from Philip Glass, and you have a mix of art and action that’s occasionally uneven but full of adventure and spirit.

Available to stream on Digital HD from Mon 20 Jan 2020