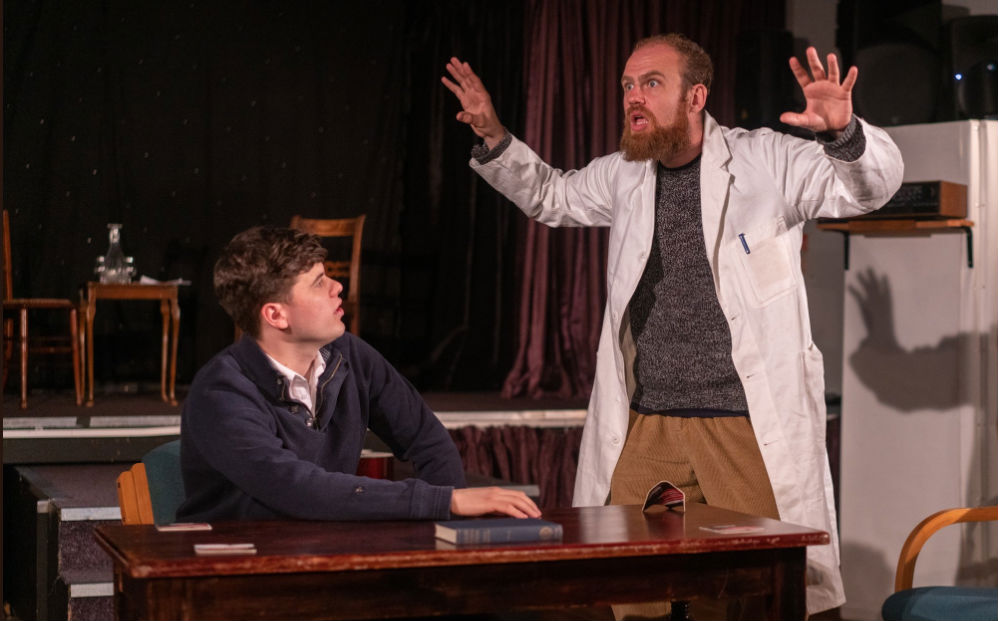 Citadel Arts‘ local history plays are always a pleasure – grassroots theatre as it’s meant to be, entertaining an engaged and enthusiastic local audience. Somehow the group keep discovering forgotten corners of Leith history to bring to the stage and this one came their way via Andy Marjoribanks, Chair of the SS Explorer Preservation Society, a group who are planning the £3.5 million restoration of this important steam-powered research vessel. This play is a step in bringing that campaign to wider attention. As usual, The Dockers’ Club makes an ideal setting for the piece. It’s old school Leith (and long may it remain that way, free from the gentrification elsewhere in the district).

Sea Changes tells the history of the Explorer, largely in flashback. We meet a group of old crewmates from the vessel, gathered on the dockside to see the old girl in her retirement. Via a series of self-introductions to the audience, we’re then cast back into life on the ship when she was fully operational – the drinking, the joking, the near-disasters.

Sean Docherty (Charlie West) is the closest we get to a lead character. An ex-con at the beginning of the chronology, his is the central thread of the piece. He works his way up from deck-hand to scientist, in so doing crossing the upstairs/downstairs division on the boat.

That class division is brought home well in the piece, with some of the cast having to leap between the two, most notably Charles Donnelly who doubles as prat-falling drunkard Tommy Keir and the unnamed brandy-sipping high heid yin in his luxury cabin.

The educational nature of the play means there’s factual detail that needs to be worked in – the ship’s spec, origin, history. Writer Jim Brown has managed to do this with unusual subtlety. It’s all in there, but not clod-footedly. When Wullie Gardner (David Magowan) imparts facts to a disinterested Docherty, for instance, it is part of building their dynamic, not a distraction from it. Director Mark Kydd has kept things light and pacey with smooth, naturally-flowing scene changes. The cast of five – completed by Chris Alexander and Gregor Davidson – are polished and play off each other well and Al Clement and Laure Paterson’s nautical musical accompaniment is a welcome addition.

Joshing between the characters is quick and lively. It’s largely Dad gags of course, but that’s in keeping with the tone of the piece and well-received here. There’s touches of slapstick too, the cheesiest bit of which – a kitchen cock-up – turns out to be a real story, we’re told afterwards by Jim Yorkston, the Explorer’s real-life chef. It’s his 40+ year old chef’s whites that are being used for costume too – an extra touch of authenticity.

There’s a closing slideshow which could use a few extra pictures of the real crew (if such items exist). The single one that’s shown enables us to compare the real characters with the fictionalised ones we’ve just seen and makes a satisfying ending (much like those found in true-story films).

Afterwards, during the post-show Q&A led by producer Liz Hare, there’s calls from the audience for the play to be reprised at the Fringe. It’s hard to disagree. While it might not be the radical or innovative fare that woos cultural tourists to the city, it’s exactly the kind of play that deserves a place there, one that’s true to the ethos of the Original Eight and that reminds us Edinburgh’s not all picture postcards of the Royal Mile. And if it’s not destined for the Fringe, then a Play, a Pie, a Pint would be a good home for it. It’s not high drama, but nor is it meant to be. It’s good, purposeful community theatre, well staged and delivered and a credit to all involved.

For more on the SS Explorer see the Preservation Society’s page. A book, priced £7, of memories from the ship is also available. Contact Citadel Arts for details.