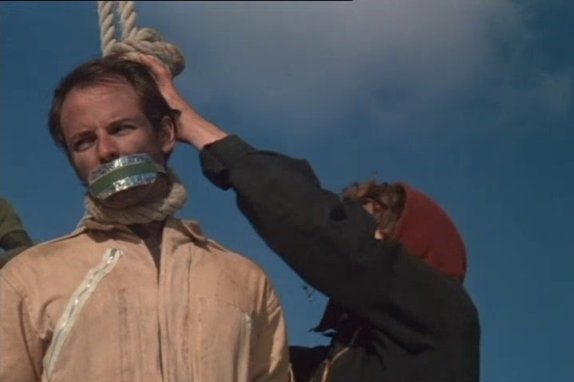 It’s an analogue world. Well, it is in this 1980s low-budget sci-fi horror. In an orbiting NORAD satellite (all flashing bulbs and TV screens) a US team of three witness WWIII played out on the monitors and release, as instructed, their own nuclear payload just to complete what others on Earth have started.

When the space capsule finally crash lands will the astronauts feel guilt, shame for what happened, relief that they remain alive? These philosophical questions, perhaps understandably, are not addressed. One of their number dies in the crash (or maybe she hasn’t), another’s demise is accompanied by having his hand chopped off by marauding hordes outside. The third, Walker (John Walsch), goes exploring.

What might have been a vaguely thoughtful exploration of the horrors of world immolation becomes all a bit Mad Max without the max budget. There is a bearded (and kilted) survivalist (Maury Chaykin) with a schoolgirl captive (Lenore Zann) in his basement and a big-tyre vehicle. Walker tries to bargain the capsule’s supply of dehydrated food for safe passage. But beardie, the astronaut and schoolgirl are rounded up by handsome Gideon Hayes (Kevin King), the local lord of the flies.

Viewers may wonder if it would be worth surviving in a world of radiation sickness and dwindling resources, vigilante cannibals and mob rule. Judging by this movie definitely not. Nevertheless, Walker is determined to try.

Produced by Roger Corman with the then new “straight to video” (i.e. no cinema release) market in mind the cheaply made and difficult to like Def-Con 4 is a curio of times gone by. The script rather spaffs away the promising initial premise. The acting is often high school am-dram and to say that the characterisation verges on the cardboard would be to say it has a dimension that it does not possess. The violence is silly and even the ticking nuclear bomb left in the satellite offers very little suspense.