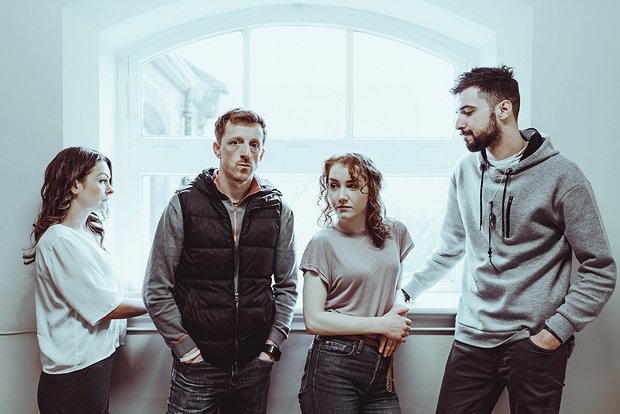 Lisa Nicoll’s new play Shattered deals with the devastating subject of child death. This topic becomes apparent gradually, carefully revealed piece by piece through the central characters’ dialogue, as agoraphobic Lucy obsesses over her neighbours’ comings and goings and concerned husband Ben desperately tries to coax her back into her real life.

The play is about mourning and the potential grief has to rip people apart, within themselves and from one another. Ben and Lucy epitomise the polar effects of death. Ben ploughs onwards through life, forcing smiles, traveling for work, encouraging Lucy along in her own process. She, on the other hand, is frozen. Her life has come to a standstill and she refuses to move anywhere, submerging herself more and more with each year that passes. Nicoll shines a light on the inevitable separation between them that is often common amongst couples after a bereavement like this.

The plot is simple, but never boring. We flit between Lucy and Ben’s static existence to the arrival of Katy, a girl who has begun running through their street late at night and who ends up becoming a crucial part of their journey. The pace is smooth and even though there are emotionally intense moments, there is never drudgery – the scenes don’t overstay their welcome and momentum is kept tight, shifting easily between character interactions. The stage setup is sparse, all in white with tiled walls and floor, perhaps to reflect the starkness of life from Lucy’s perspective or to echo a clinical environment as if we are in a hospital or lab. Sometimes the moving around of the portable central stage “block” feels a little arbitrary though. It changes between a café counter, a kitchen table and a bed – all reasonable. But sometimes the actors seem to shift it here and there or at odd angles for no real effect.

One other slightly frustrating flaw is a sense of unfulfillment in storyline. The play ends just a fraction too early and one plot strand is left untied. Throughout, the disconnect between Lucy and café owner Tom is repeatedly referenced, indicating to the audience that this is significant; that there is a secret waiting to be revealed about this pair’s relationship or past, a specific reason they are fixated on one another. However, it ends up leading us nowhere, as if it has been accidentally overegged and then ignored.

This doesn’t alter the heartfelt mood of the play, though. Each cast member embodies their role convincingly, with particular kudos to Kirsty Findlay as Katy who manages to hit her comedic lines perfectly while maintaining the vulnerability of the character. Shattered is about a distressing aspect of life but it is not morose. It is sad; it is moving; it is hopeful.