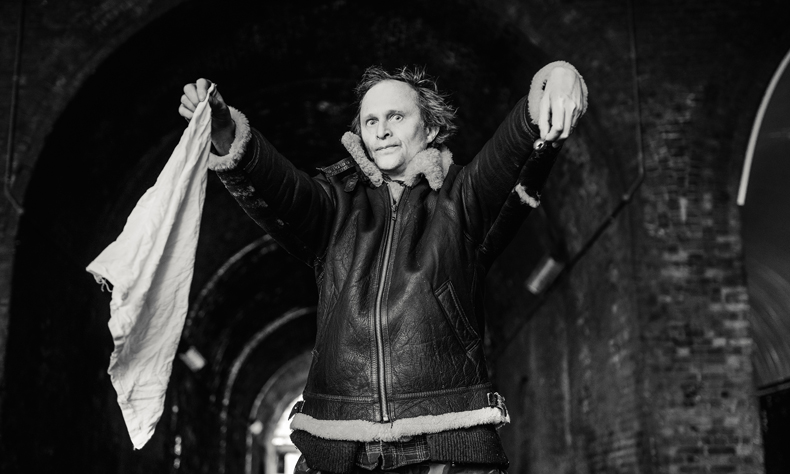 Given all the social media debates about wokeness and what is/isn’t fascist nowadays. What better time than now for Fringe regular Simon Munnery to bring back his character Alan Parker Urban Warrior for one last hurrah.

Parker, for those unfamiliar, is a radical performance poet/activist/pub—philosopher who believes everyone who disagrees with him is a fascist. All of which may seem like it is skewering a very present-day stereotype. However, the character was created in the early 90s parodying a type of radical particularly prevalent in the 80s. But with an added surrealist touch that is Munnery’s stock and trade. Don’t get it wrong though, the character is not a spiteful creation and if you are looking for an hour of contrarian PC-baiting, you should look elsewhere.

No, Parker is more of an absurd and playful creation than that. A fool who has come to deliver the audiences some truths (with a capital T!). He marches on stage, bomber jacket on, can of Strongbow in hand, all to the sound of Green Day’s American Idiot. Munnery  then opens with a nice bit of audience participation starting an impromptu band with two members of the crowd; giving one a couple of drumsticks and another a guitar to provide backing for one of his right-on anthems.

There is a heck of a lot going on here as Munnery packs the hour with songs, poems, performance pieces, and visual puns, as well as landing some pithy one-liners, plus a whole comic array of mock placards. Hell, there is even time for a round of Sainsbury-based football chants, which is not something you’re likely to see elsewhere at the Fringe. Probably the funniest moment, though, is a surreal dance break in the middle set to a reworking of The Orb’s Little Fluffy Clouds (Called Grey Clouds which was a 2007 collaboration between The Orb and Parker/Munnery).

A throwback reference for sure. Then again Parker is a throwback still pining over Punk’s heyday and still railing against Thatcher. Not that that stops Parker offering solutions on a host of current-day issues, particularly climate change, which becomes a recurring theme. He also offers a particularly creative solution to Labour’s ongoing Anti-Semitism crisis. “Radical Problems, Radical Solutions” to use one of Parker’s catchphrase’s which still perfectly parodies the type of empty sloganeering that can be found at either end of the political spectrum

Towards the end, Parker lets us in on the reason why this will be his final tour in a typically ludicrous and funny bit. It is a shame we won’t be seeing the character again (if this truly is his farewell tour,) but it is heartening to see Munnery’s comic creation go out on a high.