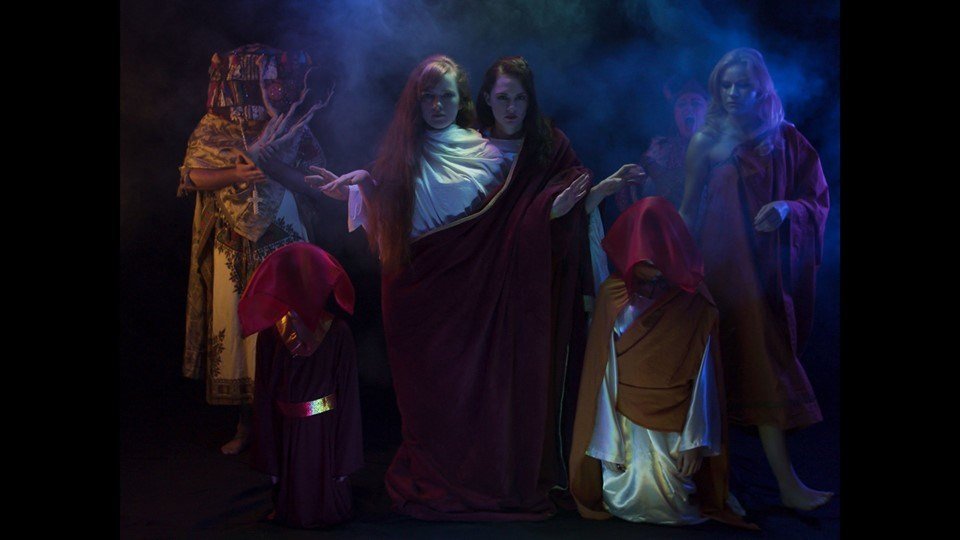 Homage to 70s B-movies takes us on a visual trip

What do you get when you cross Rocky Horror, Star Trek, Monty Python, and Mork and Mindy? It’s not the set up for a punchline, but quite possibly one of the questions posed in the writer’s room for hallucinogenic B-movie homage Sister Tempest. Superficially, it documents the fictional life story of Anne Hutchinson (Kali Russell), an orphan bringing up her younger sister, Karen (Holly Bonney), and who, in the present, retells her memories to a panel of alien beings. As an adult, Anne is a high school art teacher, trying to cope with Karen’s mysterious disappearance while forming an odd connection with a strange new student, Ginger (Linnea Gregg). But plot plays second fiddle to form and visuals here. This is a psychedelic trip of a film that asks you to suspend disbelief immediately and throw yourself down its mad rabbit hole.

It is best to delve into Sister Tempest without any of the usual expectations of special effects, structure, or performance – not because any of these are poor – just batshit crazy. Director Joe Badon relies almost exclusively on practical effects, adding to the 70s sci-fi feel of it all. Sometimes the tricks are visually impressive and succeed in creating the illusion. At other times, heads are chopped off mannequins instead of actors and costumes look like creations from primary school playtime – all ridiculously deliberate.

In terms of structure, the film begins with prologues to prologues, with flashbacks, dream sequences, journeys into Anne’s psyche, new ‘chapter’ inserts, and intermittent shots and flashes of scenes that burst into the film from nowhere only to vanish without obvious explanation, all scattered throughout.

It all combines to make something oddly hypnotic. Every scene of Sister Tempest beguiles. The performances are camp, ethereal, and childlike, and we are consistently presented with visuals that intrigue and delight: exaggerated costume, amplified neon lighting, pop art music video production. It’s like a two-hour Lady Gaga promo. On LSD. Maybe it does not create much pathos or reach us on any emotional level, but it doesn’t seem like that’s the aim here. The film is an aesthetic treat, a homage to 70s sci-fi camp, amongst other things. Kick back, feel the high, and don’t search for logic.