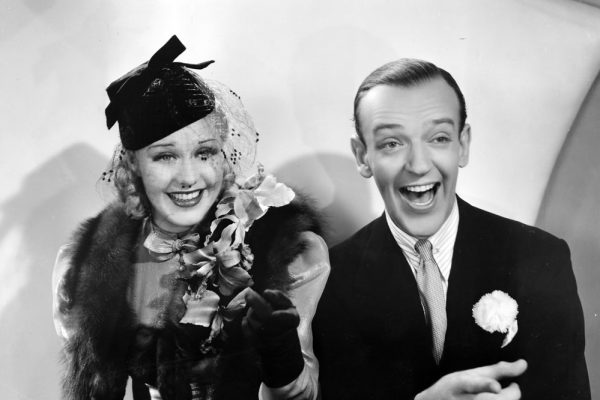 This is widely seen as the best of the Astaire/Rogers musicals.  The music (Jerome Kern with lyrics by pioneering female lyricist Dorothy Fields) and the direction from the man who went on to do classics like Shane and A Place in the Sun help lift it from the usual run. Swing Time’s jokes and pratfalls recall Steven’s early work on Laurel and Hardy comedies and Astaire, pulling faces in his bowler hat, often strikes a Stan Laurel pose.

The chemistry between Fred and Ginger is not precisely sexual but they do seem made for each other whether they are dancing together or not. For Depression audiences their song and dance musicals were pure catnip. They seemed to say that beyond the rainbow was the Rainbow Room where no matter how grim things might seem in the real world the cocktails always flow and the band play on. The story of the romance – Fred is a pro dancer pretending to get lessons from dance instructor Ginger – is a tad long-winded; not to say tiresome. Smart-alec banter between the pair keeps things afloat but it’s the dance numbers, oh the dance numbers, that make this movie magic.

Rehearsed into perfection Astaire and Rogers swirl and tippy-tap across shiny floors and up matching stairways to heaven. It’s all glorious stuff even when the humour and supporting parts are less than sparkling. For some, the salty caper in the crème brulee may be the Bojangles of Harlem blackface routine. Fred dons white gloves and blacks-up to dance in front of looming shadows. It should be seen as a bit of dated fun although to most  modern eyes it appears eye-wateringly inappropriate. Zadie Smith’s novel Swing Time nods at this Bojangles routine. Offence caused will surely be determined by the viewer’s ability to see the sequence in context – heavens, it is 80 years old.

There is a short piece by academic Mia Mask in the Blu-Ray’s extras which puts the popularity of blackface in context.