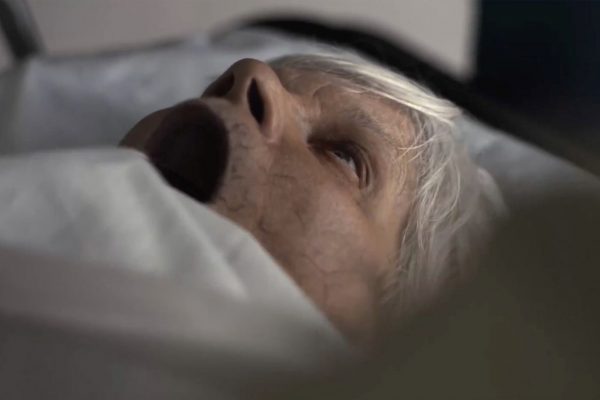 If you went down the Shock Corridor, if you grappled with The Ninth Configuration, if you questioned fantasy and reality in Unsane then it may be time for you to visit The Dead Center. A claustrophobic hospital ward, a charismatic psychiatrist, a mysterious patient… Billy Senese’s second low-budget feature walks in the footsteps of many an unsettling hospital thriller. But what it may lack in originality, it more than makes up for with intense performances, inventive sound design and an unwavering conviction to its far-out premise.

Shane Carruth stars as the troubled Dr Forrester, who finds himself protecting Jeremy Childs‘s ‘John Doe’; an unsettling new patient who has found his way into Forrester’s psych ward (via a brief spell consigned to the morgue). When a series of mysterious deaths ripple through the ward, Forrester struggles to understand the forces of evil in his charge. Meanwhile, a medical examiner (Bill Feehely) in search of a missing body is slowly closing in on the malevolent events at the hospital. Can he get there before it’s too late?

Given Shane Carruth’s own maverick filmmaker credentials (as director and star of mind-bending indie sci-fi’s Primer and Upstream Color), his presence here lends the film a greater sense of anticipation than it might have had without him cast in the lead. His performance as a psychiatrist with a disturbing past is edgy, obsessive and, when the time comes, convincingly unhinged. Paired with Jeremy Childs’ dead-eyed, physically imposing John Doe, there’s a palpable sense of threat in their every encounter. Senese constrains these performances in small rooms and narrow corridors, effectively mounting and sustaining dread across the film’s lean 93-minute run-time.

If the supernatural mystery at the film’s core feels at times a little too obscure, the parallel investigative subplot serves the dual function of alleviating the madness, whilst affirming the utter seriousness of what is at stake. As an increasingly concerned medical examiner peeling away the layers of an enigma, Bill Feehely’s determined performance is so convincing he feels like a seasoned pro helping out a low-budget indie film. The extras on this disc reveal it’s his debut performance. And he’s not the only one, with several debutantes and non-actors contributing memorable turns.

This new release from Arrow Video will keep you busy, rounding out the feature with a documentary that takes a satisfyingly deep dive into the film-making processes behind the film. Also included amongst the illuminating additional content are two shorts from Billy Senese (including The Suicide Tapes, the original short that inspired the feature). Extras aside, this absorbing B-movie should satisfy genre fans keen to visit another horror hospital.