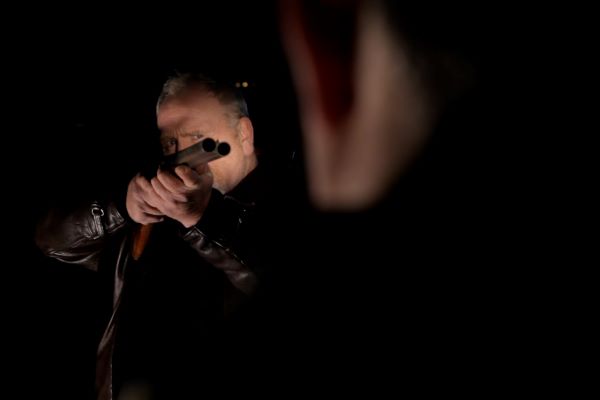 Nearly a decade later The Glass Man's story is more potent than ever, but it can't disguise troubles of the past

What a premise. What a deep-seated deconstruction of abusive and toxic masculinity. What a cast of accomplished performers, and what a shame. Just shy of a decade ago, Cristian Solimeno’s The Glass Man saw a limited release. Now, towards the tail end of 2020, this psychological thriller makes another appearance, and though it stumbles, deserves recognition for its writing, themes and commitment to a character’s gradual descent into uncontrollable systemic aggression.

Time, if anything, has been remarkably kind with Solimeno’s script, steeping the issues of recession and financial burdens until the brew is more potent now than it was in 2011. Martin Pyrite, played by then rising actor Andy Nyman, is struggling to maintain his nerve and composure as life steadily deteriorates around him, but he isn’t going to let his wife Julie discover this. Following some poor business decisions at the company, Martin seems to be the scapegoat patsy – the fall guy for the inevitable crunch. He’s lost his job, his financial security; but if he can hold it together long enough, he can save his marriage. Then, a debt collector comes knocking.

Many will be familiar with actor Andy Nyman from the recent cinematic adaptation of Ghost Stories, but Nyman has long been a writer and performer across theatre and film. At first, the simpering characterisation is irritable, but it’s intentional. Nyman responds precisely, with his cowering to men with a higher ‘status’ and the small facial expressions as he gradually builds towards snapping. He’s an everyman, the ‘beta male’ who fantasies about protecting his wife and maintaining his image.

And where Nyman develops his range from passionate but fragile into a deranged acceptance of his inner thoughts, Neve Campbell is a blank slate. Julie is far from a developed character, her protestations perhaps an advanced manifestation of Pyrite’s insecurities, her role in the narrative quickly disintegrates and removes Campbell the opportunity to offer the range of which she is capable.

Then enters James Cosmo, and The Glass Man takes a stratospheric U-turn in tension. Until now, the glacial and mundane lead-up has proven to be precisely that – preamble. To set up the fall which Martin will eventually take, and to highlight the obscene stakes he will undergo to preserve his way of life. The promotion prominently features Nyman and Campbell, but this is easily Cosmo’s film. Where fear is absolute, laughter is the only response. This is the impact  with which Cosmo imbues his scenes with Nyman and Campbell. His entire being an uncomfortable presence as his proposal to cancel the debt for a favour make for a tempting, but troublesome offer.

Everything concerning Martin ties directly into his masculinity or perceived lack thereof. The brutish, imposing nature of  Cosmo’s Pecco a persistent threat, the humiliating mugging, and the ‘emasculation’ at not being able to care for his wife. Martin’s refusal to acknowledge reality, to defer to a tribalistic notion of the power held in being a successful man of the house, is his eventual downfall. Where The Glass Man shines is towards the end, as the intense bravado of Pecco draws out a savage side of Martin, driven by a persistent need to prove himself, to ‘man up’.

Solemino’s script has such an intensely personal grasp on the perverse nature of toxic masculinity that it aches with how underutilised the heart of the story is. The Glass Man certainly feels like it was created a decade ago, even when the narrative is poignant even now. As a step into a first feature film, it’s a reasonable success for Solemino, and there are gleams of brilliance which sadly become dulled with awkward filming and redundant performances.