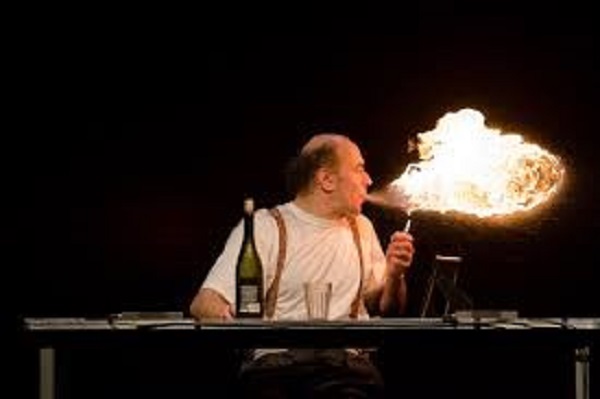 Paolo Nani has been performing his one-man show The Letter since 1992, so it’s no surprise he’s good at it. Born in Italy and now resident in Denmark, Nani has been acclaimed by la Repubblica as, ‘One of the world’s greatest clowns.’  Don’t worry though: he’s not one of the creepy clowns with make-up. Instead, he’s more of a Beckettian clown, performing on a minimalist stage with just a table, a bottle, a framed picture, a piece of paper and a pen.

The one-hour show consists of fifteen sketches, in all of which he drinks wine (and subsequently spits it out in disgust or horror), writes a letter and attempts to send it. It sounds repetitive, and it is, but it’s also hilarious. Nani consistently has the audience in stitches, and good use is made of audience participation; not enough to be annoying, but enough to create a bond between performer and audience.

Sketches range from ‘Dream’ to ‘Western’ and from ‘Horror’ to ‘Silent movie’. They are all similar and yet unique, and there is little dialogue. This is physical comedy, pure and simple. Nani’s performance takes us back to a simpler time when comedy was apolitical and simply silly for the sake of it. It’s old-fashioned, but maybe that’s what is needed these days?

For sure, The Letter is nothing ground-breaking. In the huge melting pot of the Fringe, there are certainly other performances more experimental, more radical, more daring than Nani’s. And yet, Nani’s talent is undeniable. He knows how to make people laugh and smile, which is what matters. What’s more, he comes across as genuinely passionate about his work, rather than just in it for the money.

It might not be for everyone, but if you like comedy that is (for the most part) innocent, silly and absurd, The Letter is one to check out.