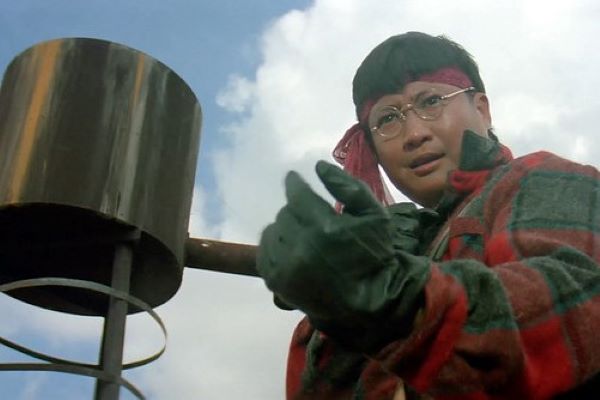 Brash, exuberant and silly comedy action with the cream of '80s Hong Kong in attendance

Eureka Entertainment continue their ongoing series of Blu-ray reissues of classic Hong Kong cinema with perhaps the most ambitious film from Sammo Hung, one of the finest and arguably the most unique martial arts star of the ’70s and ’80s. As clown as much as he is a warrior, the portly star frequently astonishes with the physicality of both his pratfalls and his fighting technique. The Millionaires’ Express is a action farce ‘western’ jam packed with a who’s who of talent, from Hong Kong and further afield. It may be chaotic, and constantly on the verge of falling apart; and it may also fall prey to the dated sexual politics that tainted Hung’s output at the time, but it’s also delightfully exuberant and studded with some of Hung’s finest stunt work.

Set vaguely in the early years of the 20th century, The Millionaires’ Express sees roguish Chin Fong Tin (Hung) return to his beleaguered hometown of Hanshui. He’s not welcomed with open arms, but vows to make amends and help return the town to its former stature. His methods of doing this aren’t exactly indicative of a new-found sense of morality. He opens a bordello, with his girlfriend Siu (Olivia Cheng) operating as madam. Aware that the titular train, stuffed with high-spending bigwigs on its maiden journey, is due to pass through the town, he blows up the track to ensure the passengers are forced to spend their time and, more importantly, their money in the town.

The Millionaires’ Express could be loosely viewed as Hung reimagining Robert Altman’s McCabe & Mrs. Miller as a Carry On film. Like Altman, Hung has assembled an impressive ensemble cast. But whereas Altman favoured sprawling character pieces, Sammo has hurled a crazy rogues gallery of convicts, pimps, lawmakers, ninjas, spies, bounty hunters, and sex workers into a blender and set it to a tumultuous 90 minutes. Each have their own designs on power, wealth, glory, or simply want to sneak a few minutes with their fancy lady away from the glaring eye of their matronly wife. At the centre of it all is Hung, like some charismatic centrifugal force, around which the cast including Kenny Bee, Rosamund Kwan, Eric Tsang, Richard Ng, Ching-Ying Lam, and Jimmy Wang revolve. He only just about manages to hold it all together, and not all the comedy works, especially the Benny Hill-like bed-hopping, it such a blur that there isn’t a spare split second in which to ponder such things until later.

Such is the sheer narrative chaos from the second act onwards, Hung’s Ching actually vanishes for long periods. Hung’s magnanimity as a director-star also manifests in letting others take the more overtly heroic roles. Chief among these is Biao Yuen‘s Tsao Cheuk Kin, who gets the pick of the fight scenes. He also gets the film’s most jaw-dropping stunt, in which he plunges to the ground from the third storey of a burning building, and jumps straight up and carries on with his dialogue. There isn’t a single cut. And, clearly no purist, the director also makes room for enjoyable cameos from Cynthia Rothrock (China O’Brien, No Witnesses) and Richard Norton (City Hunter).

If you were to be critical, The Millionaires’ Express is incredibly messy. There are a few subplots that could have been jettisoned with no bearing on the overall story, and some even peter out and are never returned to. And it’s difficult to look past the fact that Ching is operating as a pimp. It’s true that the sex workers are depicted as having real agency, and play an active role in the extended multi-stranded showdown that takes up pretty much the entire third act, but there could have been a much less retrograde way of incorporating them into the story. Despite this, it feels less entirely misogynistic than some of Hung’s earlier efforts; more whatever the Hong Kong equivalent of picture postcard nudge-wink humour would be.

Overwhelmingly in the film’s favour is the sumptuous action, and its flawless amalgamation of balletic kung fu and daredevil slapstick. Rarely has a film elicited so many chuckles and winces in quick succession. For example, while it’s largely bloodless, there are perhaps one too many instances of sword slashes to the genitals for comfort, which Hung of course plays for laughs like the giggling sadist he clearly is. With its idiosyncratic plotting, ambitious staging, loving homages to classic westerns, and far too many anachronisms to count, The Millionaires’ Express is as far removed from standard martial arts action fare as it is possible to be while remaining within the genre. It is quite possibly Sammo Hung’s finest.