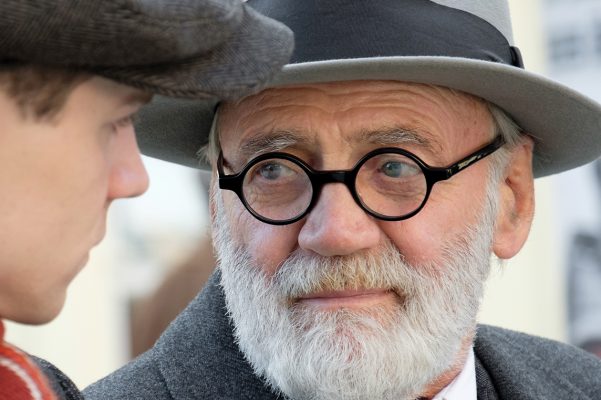 Seeing as cinema and psychoanalysis were born and developed concomitantly, there’s good reason to think there should be a rich relationship between the two. Certainly film writing (and especially film theory) has integrated the insights, the meaning-making pursuits of psychoanalysis into its DNA, and yet contemporary cinema itself seems to be reticent in paying its respects to the art of the ‘talking cure’. Both David Cronenberg and François Ozon have tried, in A Dangerous Method and Double Lover, to wildly varying degrees of success.

And now comes Nikolaus Leytner’s The Tobacconist, an adaptation of a Robert Seethaler novel of the same name, the subject of which is a period in the life of a sheltered young Austrian boy, Franz (Simon Morzé), whose apprenticeship in a tobacconist’s shop brings him into an avuncular acquaintanceship with Vienna’s most famous cigar-smoker, and the father of psychoanalysis, Sigmund Freud (Bruno Ganz).

When Franz learns of Freud’s work, he sets to find out whether he can lie on the old man’s couch. Franz is shy, and scenes involving him often fall into reverie and fantasy; add to that his infatuation with Anezka (Emma Drugunova), and he’s something an ideal study for the analyst. There’s also the problem of his nightmares: he often dreams of his home by a lake, his unconscious casting the lovely landscape in a slickly, deathly grey pallor. Dream-work invades his waking life as well, as taxidermy, dead butterflies, and a persistent spider all make appearances in his day-to-day existence; which is becoming more complicated by the moment, this being Vienna in the 1930s, as Nazism gradually grows in presence and political influence.

The film does not have a lot to recommend itself. Its dream imagery is bludgeoningly obvious — and since psychoanalysis works by delving into what’s hidden, this cancels out the tenor of the material almost instantly. The performances all seem to betray a hint of embarrassment; with the exception of Ganz, who tries with all the will in the world to enter into his scenes as the kindly professor, wise in the ways of cathexes. Ganz is always a lovely presence: even his less impressive performances display an indelible technique. But the script reduces Freud’s work to bromides, his utterances abounding in chiasmuses, in rhetorical reversals, which, when said aloud, sound like an awfully translated version of the Sayings of the Buddha.

The Tobacconist’s evocation of the period is lacking, also. Rooms’ furnishing, print materials, Nazi paraphernalia: it all looks resolutely artificial. This wouldn’t be a problem if the creakiness had some purpose in the film, if it fuelled some tension between narrative and presentation: rather it seems like a case of a ‘this-will-do’ attitude which extends into the film’s every department.