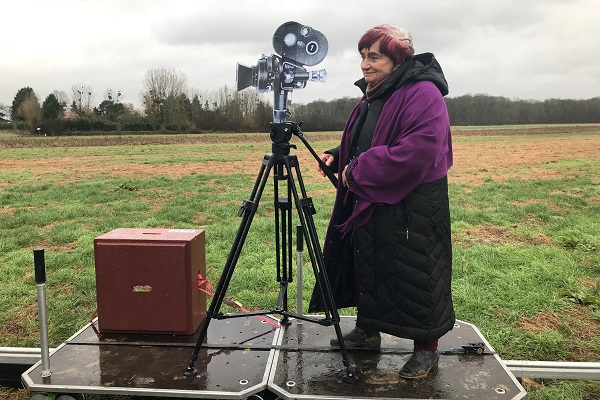 The final scene of Agnès Varda’s previous film, Faces Places, marked out possibly the best place and the best mood to close out her filmmaking career. She creates a moment of emotional exposure in a film characterised by good-humour and democratic image-making: in its end, the film, which watches Varda and her collaborator JR visit Switzerland to meet Jean-Luc Godard; Godard absconds on his invitation, supposedly scrawling a note on her window for her, reminding her of her late husband, Jacques Demy. This painful note opens up a jubilant encounter between her and JR, in which he shows her his eyes, hidden behind Godardian sunglasses, and the film ends.

Instead, since the news of her death appeared in March, her filmography will be closed out by Varda By Agnès, a mixture of recorded lectures and reminiscences which thread together a masterclass in Varda studies, delivered by Varda herself, in a cluster of arts settings: a cinema screen, a lecture hall, a theatre, a gallery. Interposed here are clippings from the features, documentaries, shorts, photographs and gallery works referenced, along with an exiguous amount of new, playful material very much in the spirit of her cine-memoir The Beaches of Agnès.

But the instinct of that film, in which Varda folds the history of her life and films together, creating a memorable example of her term ‘cine-writing’, is slightly dulled in Varda By Agnès: it’s more of a recontextualisation, a ready-to-go introduction for the newly initiated. The lectures, while entertaining, add less than they retread.

This is another way of saying it’s minor Varda: but minor Varda is still Varda. In the newly shot portions of the film, the director’s invention is still present and is still beyond charming. She begins annotating her film Vagabond, and while discussing the film’s right-to-left tracking shots, Varda herself appears on a dolly replicating the shot, all the while her actual camera simultaneously tracks and dollies towards her.

A refrain in the film is Varda’s how-to of filmmaking, the elements which make a film happen: what’s needed is inspiration, creation, and sharing. Varda By Agnès may be light on the first two, but it’s replete with her penchant for sharing in ways which please both audience and maker. One of the highlights of the documentary is discovering in greater detail the nature of her gallery work, which is, for obvious reasons, hard to know about if the gallery which houses it is far afield.

A shot from Faces Places makes a callback in the closing minutes of Varda By Agnès, augmented, made painful by an awareness of her passing. If you’re tristful during the closing moments, you’ve good reason to be. Her work serves as a prompt to look again and more closely, to revivify your thinking: to both seriously consider your place in the world and cultivate delight wherever you may find it.