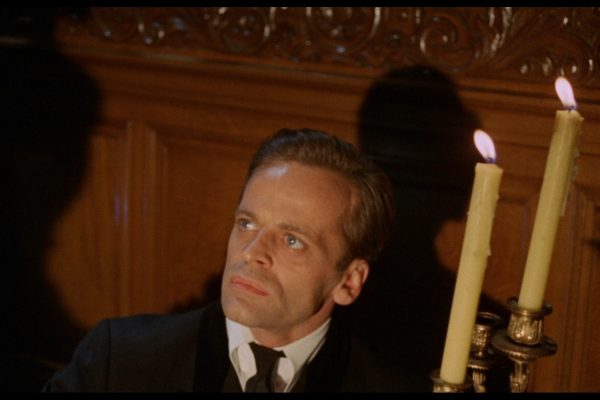 Klaus Kinski is drawn into a sleazy underworld of pornography and paranoia in this kitsch London-set mystery from director Riccardo Freda. Part of a wave of European co-productions that became popular in the post-war years, Double Face was marketed to capitalize on the burgeoning subgenres of krimi in Germany and giallo in Italy. Incorporating elements of film noir, swinging Sixties excess and some ropey effects work, it’s an odd, ambient mix, notable for a catchy Nora Orlandi score, but not much besides.

If the premise sounds like a prime catalyst for some delirious Klaus Kinski freakouts, the film delivers no such pleasures. Kinski simmers endlessly but never quite comes to the boil, maintaining a fixed, tortured scowl throughout. The supporting cast of Machiavellian women (European cult regulars Margaret Lee, Annabella Incontrera and Christiane Krüger) are far more interesting but relegated to the sidelines.

Amongst the enjoyable extras on this new restoration from Arrow Video is an insightful video essay where critic Amy Simmons positions Riccardo Freda as ‘the Grandfather of Italian horror’ (Mario Bava, his protégé, is nominated as ‘Father’). If you accept her premise, then Double Face is a frustrating watch, lacking the style, intensity and blood lust that Dario Argento and others brought to the thriller and horror genres going into the Seventies.