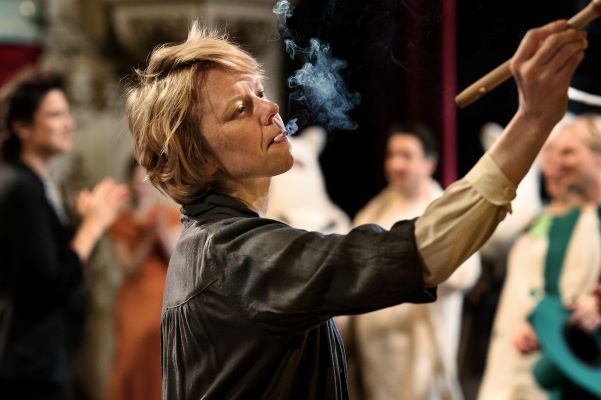 Charming biopic looks not to the creator's illustrations but to their struggle with liberty, artistic freedom and unrequited love

The Moomins; those peculiar, pudgy, little white hippos. Though our experiences with these lovable Finno-Swedish rogues may stem from sick days from school or the little comic strips, for creator Tove Jansson there was a crutch in their creation – a financial manifestation of the stories she would tell scared children in the bomb shelters of WWII. The Moomins would always find a presence in Jansson’s complicated life in her search for her validation, liberty, and the affections of another.

But more than a cartoonist, Tove’s desire for a sense of freedom and self-expression came to the loggerheads one would expect – familiar disagreements, anxiety and the artist’s ever-present motivator; unrequited love. Following WWII, as artistic interpretation came hand-in-hand with social independence, Tove Jansson was at the epicentre of the wild soirees and had an open relationship with a married politician, but her heart lay with a theatre director and daughter of a wealthy politician.

Thankfully, in a masterstroke in creative genius from writer Eeva Putro, Tove doesn’t tie the life of Jansson directly into her world-renowned creation, rather the little trolls serve as background doodles and pacifying sketches in stressful moments. The depth of the story emerges as this sense of liberty comes to fruition with an intense yearning and connection for theatre director Vivica Bandler (Krista Kosonen), as Tove moves from cartoonist’s biopic to a splendid unravelling of sexual identity and the detachment of unhealthy relationships in this strongly queer-coded piece of cinema.

In a spectacularly engaging and multi-layered performance, Alma Pöysti’s emotional journey channels directly into the narrative as she seeks to capture the artist’s spirit. Almost rhythmically, Pöysti is a joy to behold as she dances across the screen, placing as much care and sincerity into the quieter moments as she does the bombastic revelry. Together, the relationship with Bandler is a triumph for the film. Honest, human and refraining from glamorising or sexualising the relationship, Bergroth’s direction understands the importance of sharing this side of Tove with the audience without cheapening the experience.

For the virtuous, their patience will be ultimately rewarded; though they may be unaware of Tove’s impact at first. Surreptitious, potential influences from the film will not be present at first notice. And though enjoyment of the film may be evident, ripples of the emotional take on self-worth, creativity and queer romance don’t fully blossom until a day or two after watching. While it is true that the artistry of filmmaking cannot fully match the life Tove led, particularly in the colour palette, there are still secretive clues and techniques littered throughout.

The Moomins themselves take a less obvious centre stage, but Linda Wassberg’s camera-work frames these persistent pieces of Tove’s life as avatars following her in the stressful and delicate moments; crumpled sketches when arguing with her father, shot with just enough angle work to show their inclusion or a touch of shadow play when Tove feels fragile. Though well shot, Tove doesn’t turn the biopic on its head, utilising a series of camera holds and intense shots to convey the intensity she feels with Bandler. Wassberg refrains from framing the film as a shot-for-shot life story and injects just enough of the illustrator’s charm and artistry to make the film share this creativity.

In parts a traditional biopic, but for a wholly unique character, thankfully it would seem this fire-spirited and open woman didn’t listen to her father. The story behind one of children’s literature monolithic creators pries open the privacy and swept aside experiences behind the illustrations. At the centre of this is a story of unrequited love that freely explores Tove’s idiosyncratic and endearing appeal without resorting to concepts of tortured artists. But one that still conveys the seductive pain and frank sexuality she underwent and found comfort within.