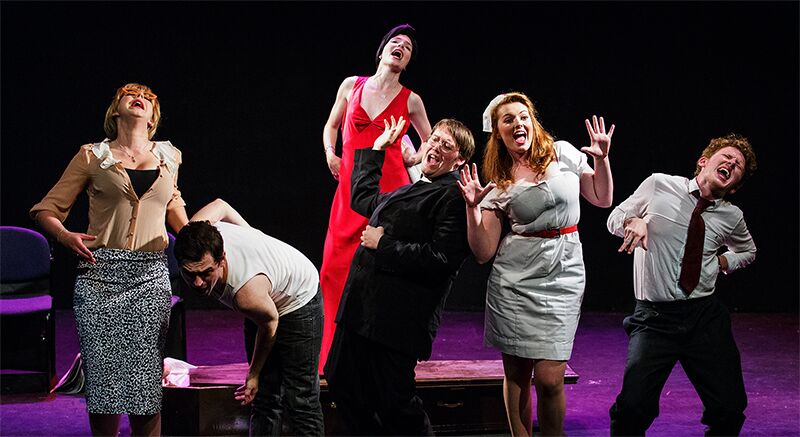 The mania of a classic B movie is captured in all its poorly-aged, disconcerting glory in Vampire Hospital Waiting Room. Vampire obsession and an overstretched health service are transformed into comedy gold. The audience will be laughing at the most ridiculous and crudest things while being blown away by the amazing musical quality of the show. Few shows will leave you with such a beaming smile quite like Beach Comet’s madcap horror show does.

The story is simple yet incredibly stupid, in the classic 1950s midnight drive-in spirit. Dr Bloom is interrupted from his brooding by the arrival of millionaire Arty, who is in a coma. The ‘good’ doctor assumes that he is the vampire lord, and plans to resurrect the undead creature so that he too can live forever. This however only captures a fraction of everything going on. Also in the mix are female character stereotypes (which get gloriously called out), a mysterious Scottish stranger and a priest who gets some of the very best lines. It’s an unpredictable, shocking and unbelievably funny undead fiasco.

The humour is absurd and ingeniously paced, striking you when you’ve just about recovered from the last joke. The playfulness between the actors makes for incendiary entertainment. They are constantly trying to crack each other up, forcing them into the inevitable smirks that trigger an uproar of laughter from the crowd. It ranges from the subtle and innocuous – a hand here, a word there – to the outlandish. The brilliance of the story rests in these comic interactions and every single one of them hits the mark perfectly.

Asides the comedy, the music is outstanding. All of the performers get their chances to demonstrate their singing talents, supported by a capable backing band. The songs feel unique, addressing various ideas and performed in different ways. A duet about romance and car crashes is as funny as it is technically dazzling. Matched with some powerful and, naturally, insanely funny lyrics, the music in the show is exceptional.

This is a rip-roaring comedy musical loud and funny enough to resurrect the dead. An amazing explosion of off-the-wall humour and prowess, Vampire Hospital is an undeniable triumph. Channeling the B movie flicks of the past, it waltzes and clambers through a maze of showmanship and comedy as it delivers an unbeatable horror flick of wonder.