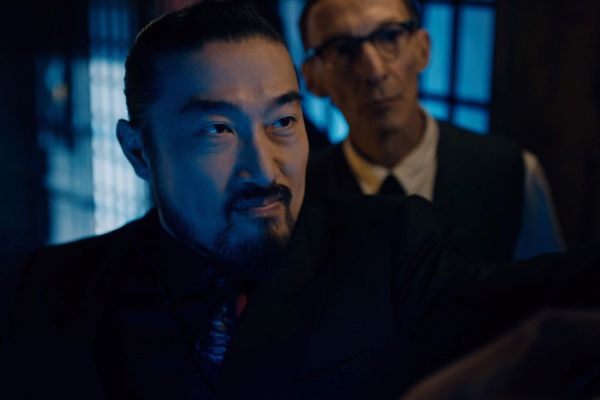 Living up to its title, this smart comedy slasher is among the best of the recent '80s throwbacks

Cody Calahan’s Vicious Fun is a comedy horror that is thankfully a case of nominative determinism in action. Once more, a young genre filmmaker refers back to the films of his formative years for a self-aware slice of fun awash in neon, practical effects, and the obligatory Carpenter-worshipping synth score. Besides the loving period detail, the film leans into its title with a gleeful, pick-and-mix greatest hits take on the slasher genre, and enough of its own character to stand out from the rest of the postmodern genre crowd.

Joel (Evan Marsh) is a sad-sack film critic for a horror magazine who pines for his housemate Sarah (Alexa Rose Steele). Stricken with jealousy after she goes on a date, he heads to a bar and drowns his sorrows a little too heavily. Coming to in a closet after hours, the dazed and hungover Joel stumbles across a self-help group for serial killers. The aspiring slasher film writer must think quickly and convince as a killer himself if he hopes to survive the night.

The killers themselves fall into the recognisable categories: there’s the hulking Jason-a-like (Robert Maillet), a suavely vicious cannibal (Sean Baek), a John Wayne Gacy ‘Pogo the Clown’ weirdo (Julian Richings), and a chameleonic psychopath clearly modelled on Ted Bundy (Ari Millen). There is also a kohl-eyed femme fatale (Amber Goldfarb, looking strikingly like Evan Rachel Wood‘s avenging android persona in season two of Westworld), and group chair Zachary (David Koechner), who pointedly gets to kill on an industrial scale at the behest of the US government.

It is, first and foremost, a great idea. So much has been made about the psychology that drives a serial killer that there is a perverse logic to the otherwise absurd setup. The casting is also, for the most part, superb. Richings and Maillet inhabit their archetypes particularly well, and Baek’s steely gaze is as sharp as his knife. It’s a pity that Millen slightly over-cranks his performance as principal villain Bob, with a range of sub-Patrick Bateman tics that mark him out as obviously crazy, and not the blandly handsome and affable face that Bundy presented to the world. Although clearly by design, and through no fault of Evan Marsh, Joel is coded so squarely as a Beta-male that there is little to the character other than a Harlequin patchwork of twitches, pratfalls, and bumbles. This is no real problem when he’s being chased by knife-wielding maniacs, but grates when he’s pining for his unattainable housemate.

Still, it is fun watching someone frantically take the Scream route and try and use their genre knowledge to stay alive. This is where the film finds its own persona, and there is a lot of fun to be had as the psychopaths discuss the minutiae of body disposal and pick at each other’s particular predilections. Calahan soon steps up the carnage though, and things become more generic, with an Assault on Precinct 13-style invasion taking place. It is at this point, with the introduction of three dopey detectives, that the comedy also gets a little broader. Happily, this is also the stage at which our murderous 12-Steppers get to strut their bloody stuff. Even more happily, the spotlight shifts away slightly from our milquetoast protagonist to a much more able and interesting secondary character. It may be instantly familiar territory, but executed (pun very much intended) with (s)lashings of verve and wit.

Jaded viewers may roll their eyes at yet another genre film mining the tropes, aesthetics, and soundtracks of the ’80s. But Vicious Fun is more than just hollow nostalgia. The writing is smart and subversive, full of sinewy bait-and-switch twists, easily succeeding in being more than a high concept and a grab bag of references. It also, crucially gets the balance between laughter and gore just about spot on, often simultaneously. There will be a day in which the current meta fixation on the aesthetic and methods of the 1980s will lose its lustre (and what are the horror specialist of the 2040s going to fixate on?), but today is not that day.