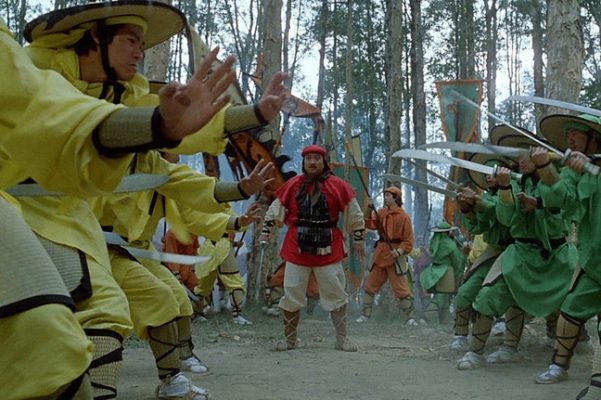 Zu Warriors from the Magic Mountain

Tsui Hark’s Zu Warriors from the Magic Mountain is considered a landmark of Hong Kong cinema; a melding of the metaphysical fantasy of the traditional Wuxia with the special effects of the Hollywood blockbuster. Far from the stately Chinese epics of  genre master King Hu (Dragon Inn, A Touch of Zen, Raining in the Mountain), Hark’s style was frenetic, relentless and irreverent, with chaotic action reigning over storytelling.

A young soldier (Yuen Biao) finds himself caught up in a war between rival armies during the Tang Dynasty. After taking refuge in an ominous cage to escape a chaotic pitched battle, he finds himself thrown into a supernatural conflict with even higher more dire consequences.

That’s really all the story  that holds any coherence at all as Hark throws a dizzying array of elements into the blender and huffs the result into the viewers eyes. Multi-coloured armies, demons, priests, ice queens and a kung fu master with magic eyebrows spin, kick and fire balls of energy at each other with insane abandon. There’s a barely a second of respite, and even a movie fan raised on a diet of the rapid cutting and eroded attention span of recent Hollywood blockbusters may find it a bit much at times. It is however, visually and endlessly inventive in the ways it hurls its main players around the screen. Many of these actors became real luminaries of the genre, such as Sammo Hung, Brigitte Lin, and Adam Cheng.

The film will likely work better for the casual viewer in its earlier moments, before Biao’s martial arts Dorothy gets picked up by the supernatural tornado. The slapstick action rivals the best of the young Jackie Chan‘s output in splendid style. The costumes are great, and the opulent colours reminiscent of those that Zhang Yimou would go on to utilise in Hero and House of Flying Daggers. Once the fantasy elements become more pronounced and constant wire work takes over it feels less engaging, even if it is utterly aware of its own silliness at times; such as a scene in which a fish pauses to laugh at a luckless monk who has just failed to catch it. It is of course likely that there are cultural references throughout that have been lost in translation, but the sheer daftness of it all does eventually claw away at the considerable initial enjoyment. That said, cast all the unnecessary elements away and it is at its core a straight good versus evil tale, separate from religious or political affiliation. There’s a childlike simplicity to the message that cuts through all else, and its impossible not to warm to that.

Zu Warriors is the cinema of Hong Kong mirroring its political situation, as the British-controlled territory was looking to the future and Chinese rule once again. As the Westerns of John Ford inspired the scope of the samurai epics of Akira Kurosawa, which then fueled the likes of The Magnificent Seven, so did the Hollywood-influenced Wuxia action reflect back west. John Carpenter has acknowledged it as the chief wellspring for Big Trouble in Little China. Zu Warriors certainly has the same charm as Carpenter’s culture-clash cult favourite, with the now rickety special effects adding a healthy injection of 80s nostalgia that goes a long way to covering up the messy narrative. Perhaps overall an important film rather than a ‘good’ one, it’s certainly an experience.