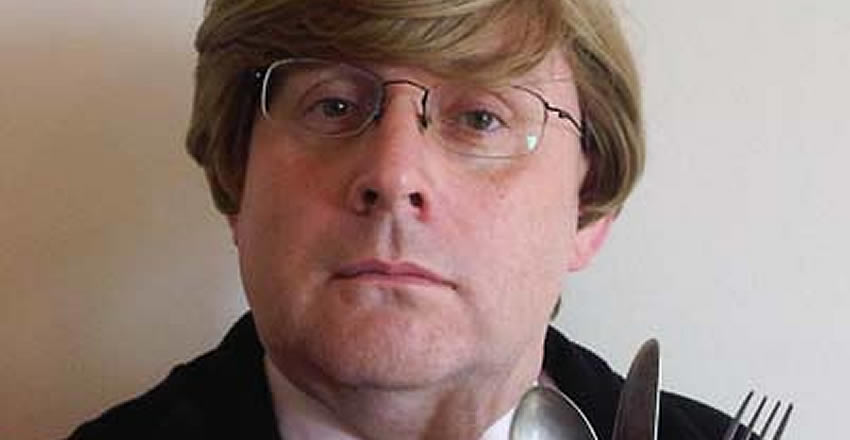 The lo-fi posters and publicity for this, with its selfie of a badly-wigged protagonist, mark it out as one of those car crash or cult classic shows. Either yer dad’s ignored all advice and re-mortgaged the house for a doomed shot at the Fringe doing the sketch no-one finds funny, or someone’s playing yer dad and absolutely nailing it. It’s very much the latter.

Ian Crawford is here to point out the hidden hazards lurking in our kitchens and round our dinner tables, and isn’t going to let us leave until we’re fully proficient and certified cutlery users. The lo-fi of the publicity carries through to the PowerPoint presentation he gives us, all badly aligned WordArt, garish colours and 1990s text transitions.

The dangers of cutlery prove surprisingly fertile comedy territory. There’s the general health and safety officiousness of his tone, there’s the ridiculous stats and pie charts, there’s cutlery-related puns, there’s real-life demonstrations of cutlery in use, and there are genuine cutlery injury case studies which contain scenes of a graphic nature. Mid-laugh, you’ll suddenly grasp your face in horror.

Then there’s the constant slogans and cheesy safety advice, many of which have catchphrase potential. “Think once, think twice, think fork, spoon, knife” is the headline one, but “must press on” is the one you’ll be quoting back at anyone you came with. It’s the line with which he greets every slide change and over-zealous burst of laughter.

The performance can be a bit rough around the edges, like an am-dram actor who’s accidentally stumbled on a very funny character, or a stand-up making his first wobbly steps into comic acting. There’s also a couple of technical points – he keeps crossing the projector, obscuring his slides, and the hip-hop track he’s done to warn us of cutlery danger has us beat-boxing so loud, we can’t hear his rap.

But no doubting its hilarity. For long stretches the laughter keeps rolling even when he’s not doing anything funny. At least three people can be seen wiping tears from his eyes. It’s not a comedy venue or a comedy crowd, but this isn’t the laughter of a naive audience easily amused. It’s the uncontrollable laughter when you’ve had too much sherry at your family party and your (genuinely) funny uncle starts impersonating his boring boss.

The introduction of a secondary character, the very similar, but biscuit-focussed Roy Windsor (think Brian Walden – jowelly cheeks, can’t say his “r”s) and the attempt to link them via an unfortunate cutlery incident in Scarborough in 1986 seems like an “Edinburgh” move, an attempt to create backstory and narrative. A tenner says the audience would be happier with more cutlery-based nonsense, although you can see the reasoning behind trying to broaden the pallette.

It’s hard to make too much of Ian Crawford’s potential as a character because the stereotype’s fairly familiar – Peter Kay’s fire safety officer springs to mind. But the lines here are often funnier than that, even if the performance is rougher. Measured on pure laughs, rather than the more esoteric qualities attached to modern comedy, it scores very high.