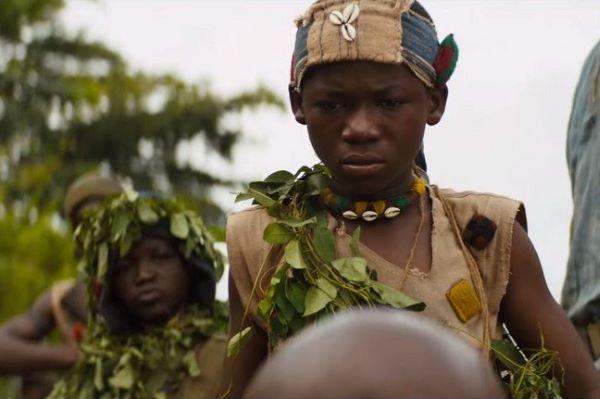 Beasts of No Nation

A harrowing and surreal child's eye view of conflict

As his Covid-wounded Bond finally limps on to the screen this weekend, it coincides with the Criterion Collection release of one of No Time to Die director Cary Joji Fukunaga’s more celebrated works. Beasts of No Nation is a visually stunning and narratively harrowing depiction of the chaotic journey of one child soldier through armed conflict in an unnamed country in West Africa.

When murderous soldiers invade the village in which young Agu (Abraham Attah) lives it tears his life apart. One small splinter of a wider civil war it may be, but Agu’s world as he knows it ends with separation from his mother and the summary execution of his male relatives. He falls in with a unit of rebel soldiers let by the mercurial Commandant (Idris Elba), who lords it over his child battalion like Fagin with semi-automatic weapons. Made monstrous by drugs, carnage, and the thirst for revenge, even if Agu survives, it’s likely to be at the cost of his humanity.

An imperious Elba will be the draw for most viewers, but the film belongs to young Abraham Attah who shoulders an unfeasible burden with bewildering versatility. There’s a shift behind the eyes – a flinty glossiness – at a certain stage that speaks of an impossible trauma, yet there are still scraps of innocence and compassion peering through, not least through a fraternal bond that he forms with fellow child warrior Strika (Emmanuel Nii Adom Quaye). While Fukunaga doesn’t shy away from violence, he never revels in it, wisely focussing on its consequences on the psyche of his young protagonist, much like the approach of Elem Klimov in Come and See. When he does place brutality front and centre it’s with great purpose, as in the almost unbearable scene where Agu is forced to make his first kill. It’s the narrative pivot of the film, and it’s an immensely powerful moment of acting and direction.

Beasts… has been criticised for adopting a jaundiced, Westernised view of Africa as one homogenous, lawless mass of outright poverty and hair-trigger political instability. It’s true that the decision to keep the setting unnamed lays it bare to such scrutiny. It’s a narrative we’ve seen before and there’s a certain biliousness that arises from seeing it again. In its defence, that the narrative view adheres so strongly to Agu is a mitigating factor. This young child will have little understanding of the larger context of country and continent, or its vast and varied history. There is simply his home and family, now stripped away. This lends the film the occasional hazy and surreal air of fable, which makes the occasional comparisons with Apocalypse Now understandable.

If there is another criticism, it’s that as the film’s narrative becomes a cycle of cumulative outrage, Fukunaga compensates by increasing its hallucinatory atmosphere. This leads to some breathtaking imagery but often drifts away from the previously tight focus on Agu. It also lingers on the political emasculating of Elba’s Commandant, which chimes with the depiction of the indiscriminate meat grinder of conflict, but once again shifts from our child’s-eye-view to a wider context that may not be fully processed by Agu (it’s worth noting that Agu narrates this events just after they have occurred), even though he’s been made wise beyond his years in the most appalling way imaginable.

Despite these few issues, Beasts of No Nation is an urgent, brutal, and harrowing vision of war through the eyes of a child, made by a filmmaker of rare vision and talent. Quite often in a film like this the message rules supreme at the expense of technique and flair. Fukunaga for the most part manages to balance content and spectacle beautifully.