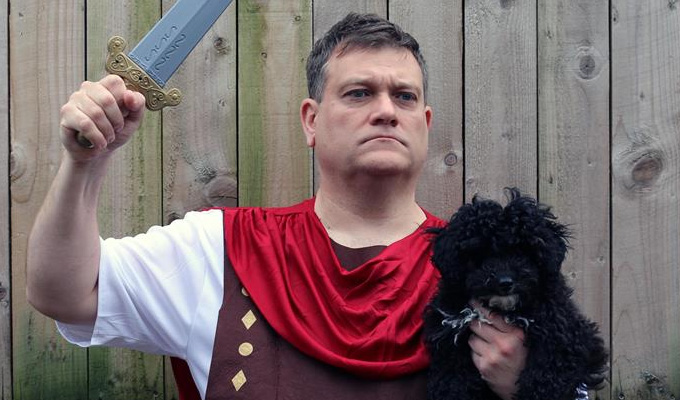 Gavin Webster
I Am Stand-Up Comedy

Geordie makes a good case for his long-standing profession

Not many gigs open with observational bantz about Rudolf Hess. It’s not really the topic du jour. And nor, in this case, is it the prelude to an hour of audience-baiting “edgy” jokes. It exists purely by way of introduction to Gavin Webster, the man and his profession. He gets on stage, he makes people laugh. He’s been doing it a long time. He’s good at it. He is stand-up comedy.

This is something of a riposte to what others do with their Edinburgh hours – the millennials with their right-on politics (which he mimics brilliantly), the men of a similar generation to Webster with their woes-of-middle-age sets (for which he has some spoof posters). To call this show a manifesto is to undermine the point. It’s an anti-manifesto. He’s just doing jokes, he’s just being funny. Why do you have to go and make things so complicated?

He’s tired of people “ironically” liking things. You either do or you don’t. He’s particularly exasperated with the “so-called” brigade, the kind of people who sneer at anything they dislike or disagree with. In his case, it’s when he gets referred to as a “so-called” comedian because he’s not delivering what the Radio 4 set want. Webster’s got a way with a funny voice and his “posh Fringe-goer” is a neat tool he employs liberally here, regardless of whether it makes a few ears burn.

He’s also not half bad as an impressionist. Dear dead Doddy gets a whole section in this set, a pleasure to see since he’s a recently departed comedy great not being mourned elsewhere on the Fringe. Which is kind of Webster’s point. Webster himself grew up with Alexei Sayle and alternative comedy, but had to admire Ken Dodd, who with his tickling stick and giddiness was just a comedian getting a laugh. Webster uses his tattyfilarious impersonation to show the kind of trouble even Doddy’d get himself in these days.

The following music section is a bit ropey, maybe even unfinished in places, but it leads him to another first class impression of a fellow Geordie – AC/DC’s Brian Johnson. Webster has him strutting up and down, clenching his fist and singing how much he likes “laaaaaaadies”, and not just in a concert scenario.

Unfortunately, the show’s ending lets itself down a bit. The comedy police (a recording of Webster doing posh police voice) have come for him for claiming to be stand-up comedy. The ensuing conversation he has with his recorded self is scruffy, but we get the point. The problem is there’s an obvious and fitting way for us to help him out here and he’s definitely earned our cooperation. But he doesn’t hint hard enough, assuming we won’t go for it, and instead ends on a daft punk rock song on his guitar. It’s a slight anti-climax.

That aside, you could be normal, go along to this show, sit back, have a laugh, enjoy the jokes, as he clearly wants you to. Or you could be one of the “so-called” brigade and bemoan the lack of narrative arc, bold concept and brave confessional ending. In that case you’ve just turned I Am Stand-Up Comedy into the high concept hour you wanted. Webster, it turns out, has got you both ways.