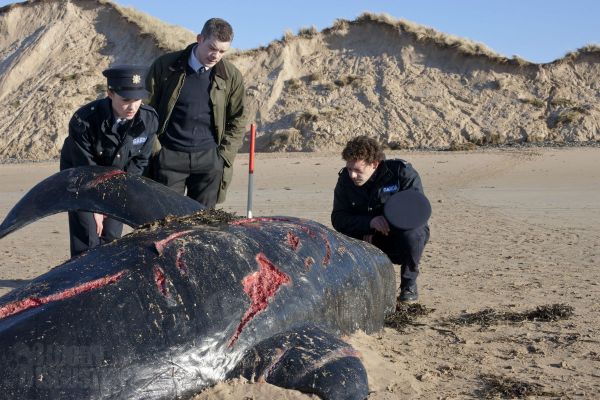 [rating:4/5] A nod to the mystery and inadvertent humour typical of 1950s sci-fi alien invasion movies.

On sleepy Erin Island off the coast of Ireland, nothing ever happens. Nothing, that is, until bloodsucking aliens from outer space decide to make it their new home. With the local chief of police off on holiday, it falls to his alcoholic deputy, Ciarán (Richard Coyle) and a goody-goody intern from Dublin (Ruth Bradley) to save the islanders from being dragged into the sea and gobbled down by hungry monsters.

With a nod to the mystery and inadvertent humour typical of the sci-fi alien invasion movies of the 1950s, this is a fun film that doesn’t take itself too seriously. Yet like its predecessors, there’s still plenty of drama and gore to keep tension in the plot and a genuine albeit light attachment to the characters. Coyle and Bradley make an unexpectedly solid and natural duo; a welcomed ‘realness’ in what could easily have become overly melodramatic performances. Similarly, the idiotic ingenuity of the islanders in a rather bizarre premise is, somehow, utterly believable. The special effects are impressive but not over-used, and Erin Island itself makes for a beautiful backdrop and quaint setting; a tranquil constant among the laughs, jumps and eccentricity.