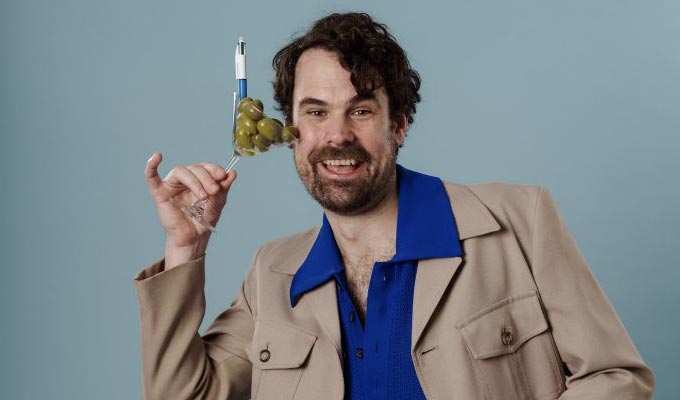 Curly from sketch duo Short &amp; Curly finds a way to make his silliness mean something

Paul F Taylor cuts an eye-catching figure with his oversized tache and retro leisure wear and the imagery that he works into his flights of fancy is just as striking as we get an hour filled with warring sheep, talking hands and anthropomorphised disease detection dogs.

Taylor is one half of sketch duo Short And Curly, and though this is stand-up in format, most of it is oddball observation turned into a talked through sketch. Thus North and South Korean relations are reimagined as a tiff between the north and south of England. We also find out what might happen if knights of today met the knights of old, or Colonel Sanders of Kentucky Fried Chicken fame met some actual colonels. It’s all highly imaginative and though occasionally it doesn’t land to the loud laughs Taylor would like it to, it’s still being enjoyed for its creativity.

Taylor goes on to show how to dramatise life’s most trivial moments as if they were films (see how a conversation about lost keys changes with some incidental music). But he’s also got a dramatic moment that he can only trivialise. His wife (and comedic partner in Short & Curly, Rebecca Shorrocks) has had a serious health diagnosis. With the mind he has, he can only head off on an excursion into Doctor, Doctor jokes.

Unlike many comedians who toss in callbacks simply to be admired in themselves, Taylor folds all his into a particularly satisfying resolution. The strand about his wife has finally given the hour some emotional heft to balance the silliness, which allows him to end on a note that celebrates the creativity that’s gone before without being entirely frivolous. Packed full of ideas, Odd Paul has been quirky and easy to enjoy.