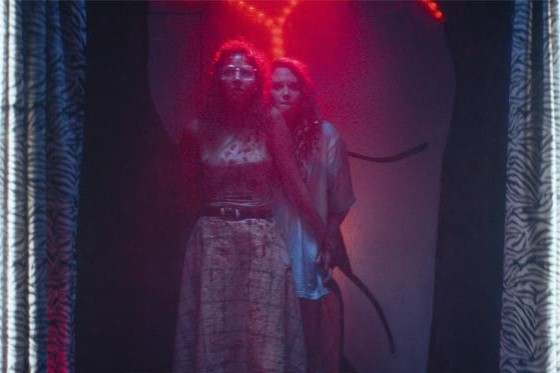 The timing of Luke Boyce’s end-of-the-world horror is eerie. With its themes of bodily autonomy clashing with religious fervour, it’s arrival on Shudder on the day the US Supreme Court voted to overturn Roe v. Wade – a decision that feels potentially apocalyptic in its own right – gives Revealer an unintentionally bitter subtext that heightens the impact of this otherwise modest two-hander. It may not deal with the issue of abortion directly, but it simmers between the fundamental ideological clash of its two protagonists.

It’s Chicago in 1987 and Angie Pitarelli (Caito Aase) is starting another shift dancing in a peep booth at the seedy strip club that gives the film its name. She’s ambushed by Sally Mewbourne (Shaina Schrooten), a rabid fundamentalist protesting against Angie’s sins of the flesh. It’s clear that this is an interaction that has taken place many times before. It just so happens that the genuine rapture – trumpets and all – kicks off. The skies turn a boiling red and before long Angie and Sally have taken refuge in Angie’s booth. As they figure out how to negotiate the Apocalypse, the two come to realise that there are hidden depths to the other.

Comic writers Tim Seeley and Michael Moreci indulge in both rampant ’80s homage and the most deranged prophecies from the Book of Revelation. Aase and Schrooten attack the grimy neon aesthetic and the eschatological narrative with gusto. Schrooten in particular gets to relish Sally’s misplaced zeal and fervour. While much of her dialogue is essentially biblical cliff notes, it feels less like simple exposition and more organically part of her character. The film is easily strongest when the two are verbally battling each other. It’s when they have to face off against less earthbound concerns that things flounder a little.

Revealer fails to really establish the horror of the situation. The budget is undoubtedly an issue, but a pack of rampaging worm creatures that are alternate between practical and rubbery and glossy, weightless CGI fail to convince, lending an absurd edge that undercuts the situation. And unfortunately, the appearance of the lust-demon Asmodeus fails to swing the pendulum back towards terror. The rubber suit is endearing in an old-school way but feels like a refugee from Psycho Goreman, which is clearly not the vibe that Boyce intended.

Despite some obvious failings, these moments are actually fairly sporadic, with Boyce preferring to expand the relationship between Angie and Sally while constricting the parameters of its set. As long as the two are bickering in that crackling, frenemy register they quickly adopt, Revealer remains fun viewing, although along with many other ’80s homages/ pastiches we’ve enjoyed/endured in the wake of Stranger Things, it may begin to pluck at a weary sense of nostalgia fatigue. One imagines however that the themes explored are better served in the pre-internet age where friendly neighbourhood wankers had to be a little more determined to track down their fix of bare flesh. Bonus points too for Angie’s Flashdance-inspired striptease, choregraphed by Aase herself (who’s a well-known burlesque performer in Chicago). Her creative input into the sensual aspects of her character is entirely not in-keeping with the ’80s sleazier edges, but is perfectly aligned to those themes of autonomy and empowerment.

A diverting meander into a fictional apocalypse while everything in the real world feels teetering on some awful chasm, Revealer avoids nihilism even as it strolls towards some entirely predictable revelations.