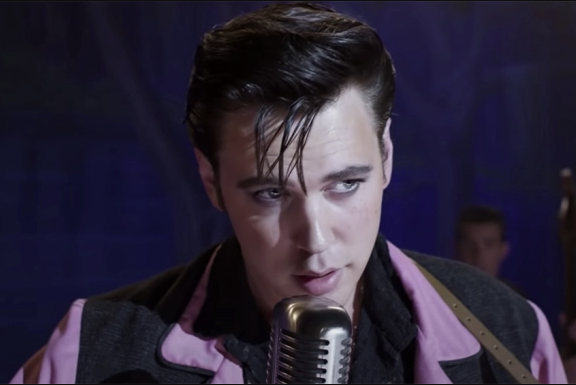 42. That’s the age Elvis Presley was at his death. Once the heartthrob of the world, reduced to a Vegas novelty. And nearly ten years since his last feature, the fairy-tale jukebox wonder that is Baz Luhrmann’s Elvis asks the question of just what, or who, killed The King of Rock n’ Roll. And it’s answered by the man who may have had the dirtiest hands in the sordid affair – Presley’s manager, Colonel Tom Parker.

Any span of Presley’s life and career could be the subject of a respective biopic, but Luhrmann attempts to cram Elvis’ discovery as a lanky, smoky-eyed teen playing alongside washed-out country singers, to his finality; the bloated, wheezing man unable to lift his microphone. It’s delusional in scope, attempting to compact so much within the 160-min running time. Luhrmann’s focus isn’t solely on Presley, but rather the fandom and culture surrounding him, and it’s frustratingly rushed and double-stuffed.

The film’s finest asset, Austin Butler, is colossally remarkable as Presley. Taking on a man who impressionists cut their teeth on, Butler embodies the family-driven teen right through to the time of Presley’s death. There’s a sensationalist aspect to the legend – the myth of the man onstage – all channelled in Butler’s dedicated physical research to embody Presley’s mannerisms, even capturing the vocal inflexions on and off stage. But more importantly, and likely more on the part of Butler, there are significant attempts to dissect the person behind the persona, behind the sideburns. Enough to enable audiences to peek behind the scarlet curtains and see the self-destructive man, but not enough to overshadow the perplexing peculiarity of Tom Hanks as Colonel Tom Parker.

Is it entertaining? By lord yes – America’s everyday champion Hanks turns in a ludicrous character performance, and the audience can’t help but devour every saturated moment. But with two juggernaut characters on screen, there’s scarcely an authentic interaction between them, leaving the influence Parker exerts over Presley feeling shallow. Meanwhile Presley’s monolithic appeal and relationship with Olivia DeJonge’s Priscilla becomes the focal point and triumph.

The addictive relationship between Presley and his fans is a persistent topic through any narrative on the Memphis singer, and for all the stumbles Luhrmann makes, this is an aspect nailed by the film’s cinematographer Mandy Walker. All the Luhrmann boxes are ticked as the camera flitters around the crowds with the attention deficit of a hopped-up toddler, blazing and blaring before oddly crashing into pathos and drawn-out melodrama.

While Luhrmann no longer has the scarlet benefits of stage extravagance with Romeo + Juliet or Moulin Rouge, the film obviously benefits from a sound score of generations, with tribute somewhat paid to the roots of Elvis’ weave of White country and Black Jazz. Although (hopefully) unintentionally, Luhrmann does fall into a pitfall of his setting, limiting the scale and voice of any significant black characters – with only Kelvin Harrison Jnr’s B.B. King or Shonka Dukureh’s Big Mama Thornton having more than a fleeting moment.

In a turn of phrase the Colonel may enjoy; high risk, high rewards. Luhrmann champions this ideology with the initial third of the film, re-igniting what was lost in Gatsby, but settles into too fine and tepid a grove for the remainder of Elvis. No one embarks on a Luhrmann film with low expectations of gaudy, brash and bold taste, but even with Butler’s melting gaze and a slick return to manic filmmaking, The King’s life seems too powerful a presence to script.

Elvis runs at the Filmhouse, Edinburgh until Thu Jul 14 2022