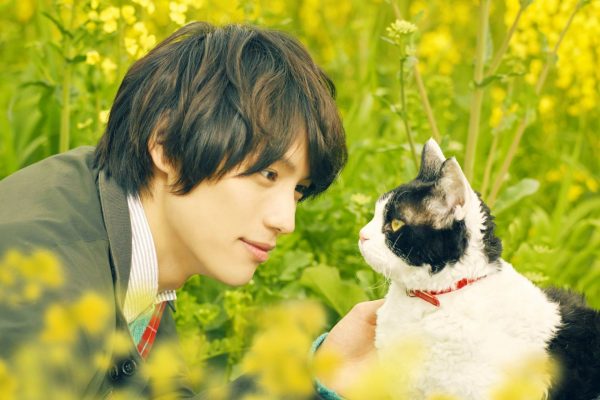 Emotional comedy-drama about one man and his cat is a poignant life story told with energy and admiration.

On the face of it, Kôichirô Miki’s comedy-drama is a nice chance to absolve yourself of the world’s many problems by throwing yourself at the cute, fuzzy delight of a playful kitten. These kinds of throwaway movies are charming, if usually somewhat empty. But The Travelling Cat Chronicles proves much more than a chance to relish the presence of a feline friend. It is also a moving, intimate story of one young man’s life and how his cat remains a reassuring member of the family through all the ups and downs.

Based on a novel by Hiro Arikawa, family, death and emotion feature heavily throughout the different parts of the story. Satoru (Sôta Fukushi) owns a pretty black and white cat called Nana – who happens to be self-aware and has an internal monologue hilariously voiced by Mitsuki Takahata. Satoru can’t look after Nana anymore, so goes on a journey for a new owner that reintroduces him to old friends and features recollections of his childhood and teenage years. It often feels like a happy-go-lucky flick, yet some parts are also incredibly sad and sombre. Happily, it doesn’t feel jarring at all.

The cat is the main source of the comedy, with Nana getting the best lines and exhibiting the kind of no-nonsense attitude you would expect from someone of her species. Yet it is her serious relationship with Satoru that makes the film tick. His love for animals is endearing, always present at significant stages of his life. The most moving moment of the whole film comes early, during a flashback to his childhood where he insists that pets are family. The question of who is, or isn’t, family is what grounds the film and gives it a substantial emotional pull.

The writing is so tender that you never once question Satoru’s seeming ability to communicate with Nana, helped by a down-to-earth performance from Fukushi. Everything about The Travelling Cat Chronicles is made with high levels of sympathy and tact, but that’s not to say that it’s a drab affair. Indeed once or twice it might try too hard with the emotional highs. It instead reaches its potential when Satoru and Nara are left alone in relative silence.

Moving, contemplative and filmed with a real love for everything life can throw at you, The Travelling Cat Chronicles is a quiet marvel. You might expect a cutesy film about a charming little kitten, and sometimes that’s what you get. But you can also be rewarded with much more. This depiction of love and sorrow is made all the better by its feline star, a worthy centrepiece for Miki’s impressive family drama.