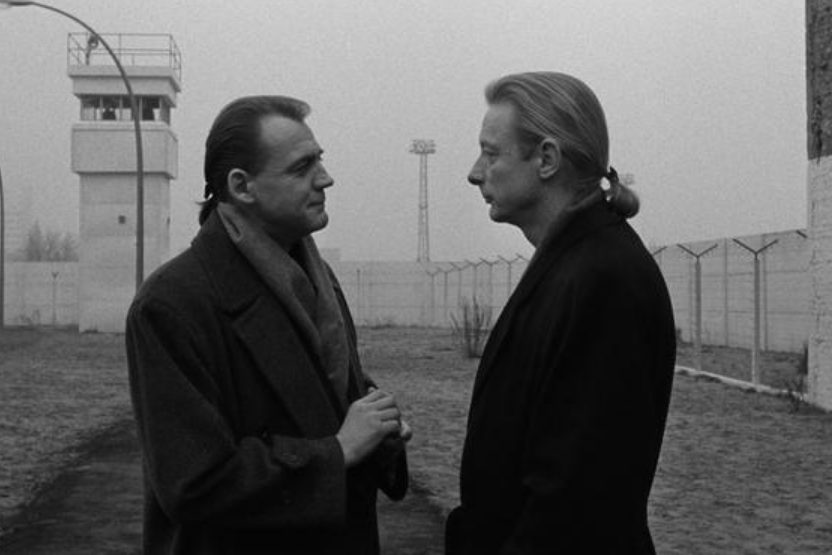 While some may pine for the Nicolas Cage/ Meg Ryan remake, Wim Wenders’ 1987 classic film is a remarkable cinematic experience. After painstaking restoration, both sepia-tinted black-and-white sections, and lustrous colour scenes, are vivid, luminous. It deserves a watch at a time when empathy sometimes seems in short supply. Our guides are angels, Damiel (Bruno Ganz) and Cassiel (Otto Sander) observing with compassion the tumult of human affairs.

As they wander unseen around a chaotic, dishevelled West Berlin, we are led to reflect. The angels’ mission is to “assemble, testify, preserve,” and so through them we hear the thoughts of a range of characters. Along with a pregnant woman in an ambulance, a distraught man, and a young sex worker, is an old man, Homer who, in his quest for, ‘an epic of peace’ leads them in search of the Potsdamer Platz. That he finds only rubble in an overgrown field speaks volumes about the Berlin we – and the angels – see. Graffiti and dereliction are everywhere. Archive footage of a shattered post-war city reminds us of dark history – as does the unavoidable barrier of the Berlin Wall.

Wings of Desire is a brilliant collaboration. The script by Peter Handke and Wim Wenders, with some improvisation, embeds us in a poetic, humane sensibility. Voice-overs, dialogue and a constant focus on the watcher reiterate the theme of seeing; of voyeurism even. The enquiring, constantly mobile cinematography, directed by Henri Alekan (of Cocteau’s La Belle et la Bête fame), combines detachment and sensitivity. 360° filming, interspersed with aerial filming, tracking shots, and striking long shots place characters thoroughly in the 20th-century wasteland. We are encouraged to scrutinise characters and their worlds with some intensity.

But seeing is not enough. Damiel’s growing obsession with a brilliant and beautiful trapeze artist, Marion (Solveig Dommartin), highlights the film’s prescription of greater emotional involvement. The subsequent transitions from black-and-white to colour symbolise the fuller, more engaged life possible when Damiel becomes mortal. This is powerful. The realisation of mutual desire between Damiel and Marion provides the film’s cathartic moment.

Peter Falk’s contribution is significant. His presence as an actor visiting Berlin to make a Nazi-era film, confirm the power of the past (as well as Wenders’ affection for Hollywood). But he also reveals that he too was formerly an angel, one who renounced that role. We understand the rightness of Damiel’s choice to participate in the world.

The film’s ultimate message is to see with the eyes of a child, to value life, every sensation, every detail. When Ganz and Dommartin are finally united in the bar at a typically visceral concert by Nick Cave and the Bad Seeds, we rejoice at their finding one another. Her monologue as they connect is magnificent. It is, like the film, testament to the refusal to compromise, to an insistence on feeling.