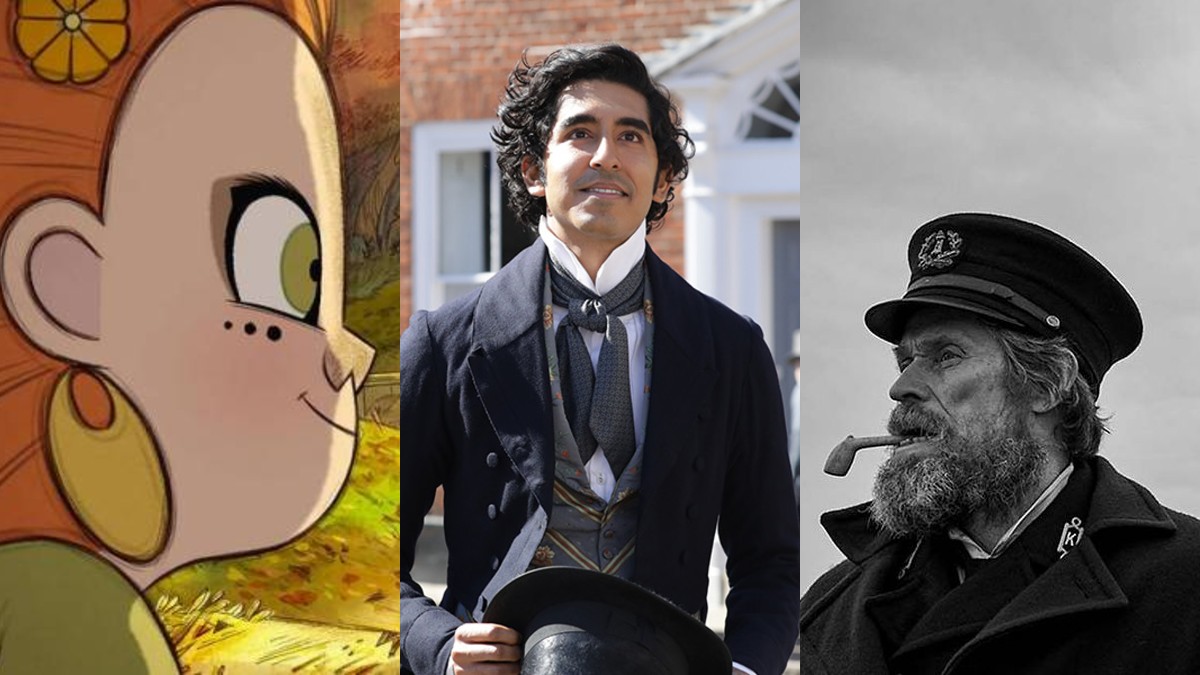 The pandemic put paid to a lot of our reviewing activity this year. Not so with our film section. We’ve seen over 350 films in 2020, and after polling our writers to find out which they enjoyed best, here’s our Top Ten:

10. The Personal History of David Copperfield

“Armando Iannucci’s great, rollicking follow-up to the hit The Death of Stalin… is far from a bland period adaptation. Lacking the cynicism of Iannucci’s political satires, the film nevertheless makes its points thoroughly, and with a warm heart. The frequent descent into absurdity, rich characterisation, abrupt changes of mood – these reveal, strikingly, Victorian snobbery, prejudice, and pretension. Armando Iannucci is a sharp cookie, and there are clear parallels with the modern world. Chance, a trivial mishap, the unruly ripples from some far-off disaster – these could, and still can, suddenly turn lives for the worse. You don’t need to be a child whose father is shipped off to the debtors’ prison to feel the anguish in Dickens’ stories.”

Not reviewed by our team, Eliza Huttman’s drama was nevertheless rated highly here as elsewhere. As The Scotsman said, “Tracking a high school student’s struggle to a get an abortion in present day America… Never Rarely Sometimes Always sees the New York-based filmmaker come into her own with a brilliantly subtle slice-of-life drama about a young woman’s rapidly shrinking rights over her own body.”

Another one we didn’t review at the time, but which proved popular among the team. “A Tinder date goes humorously then horrible awry,” explain The List in their review, “in this welcome twist on the lovers on the run flick from Beyoncé collaborator and debut helmer Melina Matsoukas, which combines style, subtlety and a vaguely oddball air.”

“1917 doesn’t disappoint. Set post-Somme in the trenches of World War I, it tells the story of a very small part of a larger picture. It allows us to see events unfold through the eyes of the characters as we experience the horror, shock and suspense with gritty reality.

The performances are consuming too, with a big-name cast including Benedict Cumberbatch, Colin Firth and Andrew Scott. Scott’s brilliantly pitched and utterly real lieutenant brings moments of humour to an otherwise harrowing, high-stress watch. Yet the famous faces are all resigned to cameos, with almost all of the action centering on the two relatively un-starry leads – a refreshing change from standard blockbuster fare.”

“Steeped in the myths and fables of Ireland, Wolfwalkers is a family film with surprisingly adult themes like colonialism, the uneasy relationship between humanity and nature, and even organised religion. With gorgeous, tactile animation and robust, archetypal storytelling, it is a perfectly judged film that will enchant children (and adults) while very much respecting their intelligence.

It isn’t just one of the best animated films of 2020, but one of the best films period. A fast-paced and heartfelt adventure that is immaculate in its craft, and brimming with love for the culture it depicts, it is hard to see it as anything other than an instant classic.”

“As a damning indictment of western exploitation of the South American country, as a political satire on the corruption and hypocrisy of those in power and as a stunning spectacle of cinematic theatre, Bacurau is an unqualified success across the board.

The script is expertly paced to feed us just enough confusing titbits of information to whet our interest, but not too few to incite exasperation. As the story progresses, events escalate out of control and the simmering tension spills over into Quentin Tarantino-esque levels of violence. Indeed, there’s much common ground between Tarantino’s early work and this snappy, stylish thriller, with lashings of Alejandro Jodorowsky and even some Sergio Leone thrown in for good measure.

The end result of that hodgepodge of styles and cinematic influences is an enthralling film which keeps the viewer hooked from start to finish.”

“Rose Glass’ psychological thriller plummets the audience into the morose and obsessive mindscape of a young, seemingly good-natured nurse as she comes to care for a dying patient. With a redemptive mindset, Maud seeks not only to ease the woman’s suffering body but to care for her ailing spirit. Full of ritualised obsession, Morfydd Clark’s performance of Maud is unsettling, yet it conjures grounded insecurities, and dare we say, even recognition.

Glass’ unwillingness to sully the film with cheap novelty, instead ingraining its twisting gnarled roots in a religious sub-text, makes for a visually exquisite embrace of eroticised religion and a near-ideal eighty-minute horror classic.

“The latest offering from the brothers Josh and Benny Safdie, unequivocally proves that every now and then, a diamond can be plucked from even the murkiest of depths. [Adam Sandler] gives a career-defining performance as Howard Ratner, a jeweller in Manhattan’s Diamond District with a severe gambling addiction, who is closing in on the deal of a lifetime while his adversaries simultaneously close in around him.

What unfolds is a rapid affair that is at once chaotic and thoroughly gripping, with the audience unable to look away from the screen for a second.”

“A full-throated, strange tale. [Robert] Eggers locates his two characters Ephraim Winslow (Robert Pattinson) and Thomas Wake (Willem Dafoe) in a lighthouse off the Maine coast, a century and more ago. The film tells of their four weeks together in this remote, inhospitable place. It is fair to say, things do not go smoothly.

“It’s difficult to say too much about Parasite without spoiling an experience that will only be heightened by the coldest of viewings. Safe to say, Bong [Joon-ho] pulls every string with the most dextrous skill and subversive eye.

Like [other] recent films dealing with the collision between society’s haves and have-nots, Parasite is thought-provoking, but has its sights firmly set primarily on being entertaining. And it is. Phenomenally so. In its ambiguity, and its playfully cruel delight in wrong-footing the viewer it’s in a class of its own. There are elements of farce, drama, and Shakespearean tragedy all thrown in. That it works at all is unlikely. That it glides along with the ease and velocity of a champion speed skater is staggering.”