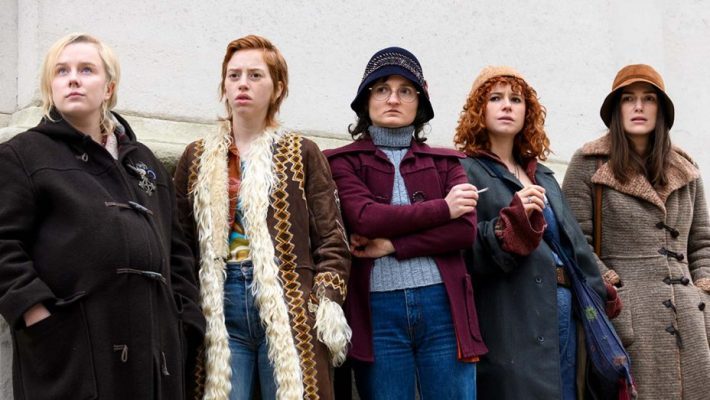 Too British for its good, doesn't capitalise on potential or effective cast

‘Beauty with a Purpose,’ was the slogan for the longest-running beauty pageant, Miss World; one which didn’t come into effect until around 30 years after the contest’s conception. This saw the addition of intelligence and personality ‘points’ to deter from the previous, purely aesthetic decisions in judging. Misbehaviour from director Phillipa Lowthorpe focuses on the catalyst which sparked this change in the pageant.

Miss World 1970 is fresh from record-high viewership the previous year, and a group from the Women’s Liberation plan on disrupting the event. Begrudgingly at first, history student Sally Alexander (Keira Knightley) joins Jo Robinson (Jessie Buckley) in an attempt to draw attention to the abusive control of the patriarchy, and how the objectification of the women involved in the contest reinforces this for future generations. All the while the pageant dodges controversy, threats and attempts to secure legendary American comic Bob Hope (Greg Kinnear) to host the event.

Here we stumble on the first step, which is the heft of capability with this cast; so much that our attentions are spread. Just as a scene or interaction builds to an investable conclusion, there’s another plotline which needs addressing. Kinnear, who perhaps has the trickiest task as Bob Hope, attempts to offer dimensions to the role, but there isn’t enough screen time for the presence to sink in. It’s an amiable performance, a canny likeness, but Kinnear is only able to capture the misogyny, not the man attempting to live up to his notoriety. Revelling in the raffish attitude is Rhys Ifans, as Eric Morley, ‘Mr Miss World’, alongside Keeley Hawes as his wife Julia. Ifans is hammy, even by his standards, but it works due to Morley’s attitude, his larger than life persona.

Pitching itself as following the formation, and propelling the coverage of, the Women’s Liberation movement, Misbehaviour intends on also showcasing a semi-biographic of Bob Hope, Eric and Julia Morley and Jennifer Hosten, Miss Grenada. All stories worth their salt, but the division means little weight sits on the shoulders of analysis; there isn’t time to invest, to hate or to cherish these characters. Particularly so in the case of Gugu Mbatha-Raw, who offers much promise as Hosten in the brief, but invested, snippet scenes she shares with Knightley.

Overly considerate, Misbehaviour seems a little too British for its own good. Rebecca Frayn and Gaby Chiappe’s script leans towards the pleasantly accessible in focus, rather than the bold. It doesn’t follow its narrative journey, that while the women in the film know where to draw out the big guns, the filmmakers seem to try and concentrate on finesse for comedy and whopping out the sledgehammers for commentary, achieving neither.

There is though, a cleverness to aspects of the screenplay, particularly in the reinforcement of allegories drawn between the objectification of women and reflective attitudes. Had this been maintained throughout, Misbehaviour could have been a spectacular comedy-drama. From the hopeful’s measurements, their constant corralling on stage and off, and the numbered discs present on the women’s wrists and ‘rump cam’ shots, Frayn and Chiappe build on this image of the contest as a cattle market.

It’s perhaps a backhanded compliment, but there’s little inherently wrong with Lowthorpe’s film. On the whole, Misbehaviour’s intentions are admirable, and for the bulk of the film the humour balances, the interpretations of people are held throughout, but there’s a division in narrative arcs. Everything feels three-quarters full, that there’s more emotion to draw out and deeper connections to be made. Sitting at just under two hours, Misbehaviour could have easily held an audience for a further fifteen minutes, even half an hour, which would allow the film to serve as a tribute to all of those involved, rather than the couple we hone in on.