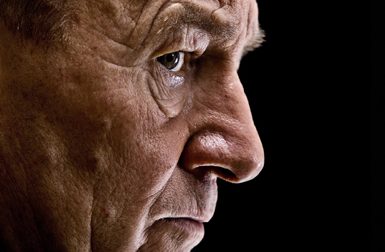 The Cause of Thunder

A meandering but entertaining meditation on the ways in which the world has changed since Brexit.

Considering how few older white men are given a voice in politics today, it’s a good thing one-man show The Cause of Thunder is here to fill in the gap. Bob Cunningham, played by David Hayman, is an ageing trade unionist reflecting on post-Brexit, post-truth politics and old age. It is a follow-up of sorts to 2014’s The Pitiless Storm, by the same production team: writer Chris Dolan, director David Hayman Jr., in which Hayman’s Bob Cunningham character wrestled with Scottish Independence.

In a pub that appears to be located at the centre of an immobile storm, judging from the simultaneous thunder and lightning effects, Bob reflects on whether he can say he’s lived a worthwhile life when he will be leaving the world in a much worse state than he found it. The tone is bleak, with imagery and references to the apocalypse, or more specifically to the Rapture and Judgement Day, peppered throughout. Bob is lamenting both his own approaching demise and that of the world, as everything he once took for granted is being stripped away: the welfare state, the importance of facts, his ability to run after a bus.

The monologue is meandering, with Bob relating stories and cracking jokes in addition to his more serious meditations. There is no attempt to present a rational political argument, and the stories he tells are only loosely related. The Judgement Day references are only tangentially tied in with the political aspect at the end, when rising from the grave is equated with resisting the efforts of the establishment to silence him. It is a successful portrayal of a wandering mind, but making stronger connections between all the elements, if only at the end, would have made for a stronger play.

Hayman is a charismatic storyteller, and his performance is emotionally resonant, especially for the mostly older audience. However, with diversity in theatre (or the lack of it) so often discussed, it is worth asking whether we need to hear from yet another old white man. While Bob Cunningham represents the less commonly seen working-class, elderly Remain voter, he is neither offering a new perspective nor any new solutions when it comes to Brexit and the general political mess we face. That aside, it is an entertaining piece and the final message to come together and “keep on resisting” suggests there may be light at the end of this dark tunnel.